Covid-19 could have arrived in UK on at least 1,350 separate occasions – study 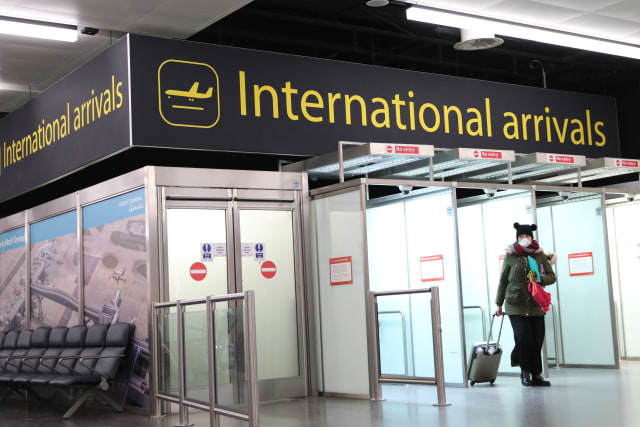 Scientists believe coronavirus may have entered the country on 1,356 separate occasions at the beginning of the UK epidemic, which peaked in mid-March.

The Covid-19 Genomics UK (Cog-UK) consortium studied the genetic code of the virus and analysed data on inbound travel and the number of infections worldwide to determine how Covid-19 was introduced in the UK.

Its preliminary analysis shows there was “a very large number of importations due to inbound international travel”, with around a third of cases estimated to have come from Spain.

The study, which has not been peer-reviewed, states the virus did not begin from one source – more commonly known as “patient zero” – but that there were at least 1,356 separate points of origin, which scientists warned is likely to be an underestimate.

The report states that until the beginning of March, the UK received around 1.75 million inbound travellers per week, which was 10% higher at the end of February due to the half-term school holidays.

It estimates that 80% of the earliest cases of Covid-19 that arrived in the UK happened between February 28 and March 29.

The Government advised against all non-essential overseas travel on March 17 and advised British travellers overseas to return to the UK on March 23.

From Monday this week, travellers arriving in the country are required to self-isolate for 14 days or face a fine of up to £1,000 in England.

The study states: “The rate peaked in mid-March and most introductions occurred during March 2020.”

It continued: “There was a period in mid-March when inbound travel to the UK was still substantial and coincided with high numbers of active cases elsewhere.”

The UK was placed in lockdown on March 23, which Neil Ferguson, professor of mathematical biology at Imperial College London, believes could have been implemented earlier to save thousands of lives.

On Wednesday, he told the Science and Technology Committee that the death toll could have been halved had lockdown been introduced a week earlier.

The greatest number of inbound travellers arrived from Spain and France, which could account for 34% and 29% of imported cases respectively, the study said.

There were also high numbers estimated to be coming from Italy (14%), Belgium (6%) and the Netherlands (5%), it added.

As 20,000 people were flying in from Spain per day in mid-March, the study suggested that events such as football matches were likely to have made little contribution to bringing the virus into the country.

It stated that initial cases of the virus coming into the UK from China, where the first case of coronavirus was reported, constituted “a tiny fraction” of all cases, estimated to be around 0.08%.

The study found that the number of imported cases quickly declined to a low level in April.