Vandalised statue in Edinburgh to have plaque installed after wording agreed 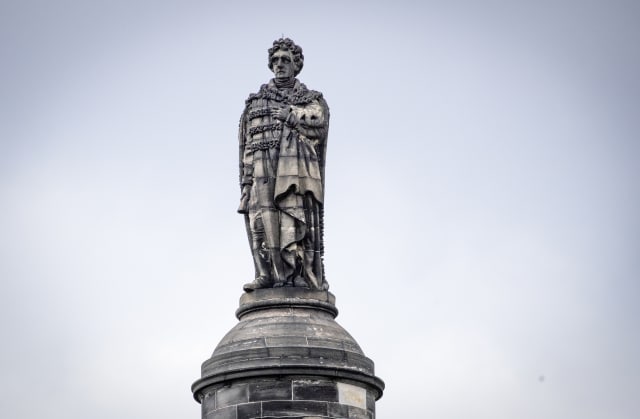 A plaque will be installed at a monument in Edinburgh dedicated to a politician who delayed the abolition of slavery, after wording was agreed by the local authority.

Henry Dundas, 1st Viscount Melville, worked to frustrate efforts to end the trade by using his influence as home secretary, setting the move back 15 years.

A 150ft column with a statue of the politician – known as the Melville Monument – stands in St Andrew Square and was vandalised during the Black Lives Matter protest in the city on Sunday.

Council leader Adam McVey held a meeting of partners – including the site’s owners – and wording for the plaque was agreed, which will be published on Wednesday.

He said: “We have a lot to celebrate about the contribution black and ethnic minority Edinburghers have made and are making to our city’s progress and success, and that should be clear.

“We also need to address and talk openly about those moments in Scottish history where people have been killed, enslaved or discriminated against simply because of their race.

“I’m pleased to say that we’ve come to a form of words on a plaque at the statue of Henry Dundas – and this will be published tomorrow.”

He added: “It will be finalised and installed at the foot of the Melville Monument as soon as possible.

“This is just one part of Edinburgh’s history and one small change we can make.

“We should make many more.”

Dundas put forward an amendment to a Bill that would abolish slavery in 1792, opting for a more gradual approach.

This allowed the practice to continue for 15 years longer than it otherwise would have done.

During this time an estimated 630,000 people were transported to Britain as slaves.

Dundas was nicknamed “the Great Tyrant” and was later impeached for the misappropriation of public money in 1806.

The now A-listed monument was erected in 1823.

Mr McVey told BBC Radio Scotland’s Good Morning Scotland programme: “I would have absolutely no sense of loss if the Dundas statue was removed and replaced with something else or left as a plinth.

Graffiti was also scrawled on the monument to Sir Winston Churchill in Parliament Square, London.

On Tuesday, London Mayor Sadiq Khan announced the city’s landmarks will be reviewed to ensure they reflect the capital’s diversity.

He said the Commission for Diversity in the Public Realm will examine murals, street art, street names, statues and other memorials, and consider which legacies should be celebrated before making recommendations.

WHO: Emerging evidence that Covid-19 could be airborne

Starmer urges Johnson to apologise for comments on care homes

How Japan is dealing with floods amid coronavirus