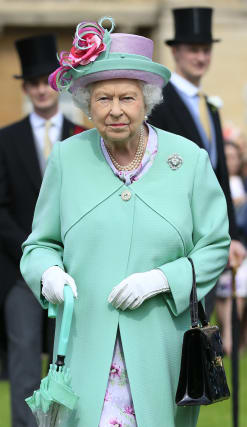 The Queen chose a sparkling diamond brooch with an 18.8-carat heart-shaped stone at its centre for the Duke of Edinburgh’s official 99th birthday photograph.

The monarch picked the Cullinan V – one of her favourite pieces of jewellery – for the special celebratory portrait with her husband of more than 70 years at Windsor Castle.

She has worn it many times over the decades including to the wedding of her granddaughter Princess Eugenie, at London Fashion Week, and for State Openings of Parliament, garden parties, investitures and audiences.

The Cullinan V originally belonged to the monarch’s grandmother, Queen Mary, and was worn as part of the suite of jewellery made for the Delhi Durbar in 1911.

It is one of a number of stones cut from the famous 3,106-carat Cullinan – the largest diamond ever found.

Mined in South Africa, the original Cullinan stone was given to King Edward VII in 1907 by the government of the Transvaal – a symbolic gesture intended to heal the rift between Britain and South Africa following the Boer War.

The royal family refer to some of the other pieces from the original diamond – the Cullinan III – a pear shaped 94.4-carat drop – and Cullinan IV – a cushion-shaped 63.6-carat diamond – mounted together as a brooch – as “Granny’s chips”.Parts of it were later set in the Crown Jewels – in the Sovereign’s Sceptre and the Imperial State Crown.

The Queen inherited the brooches on Queen Mary’s death in 1953.