Queen and Philip together in ‘royal cocoon’ during lockdown 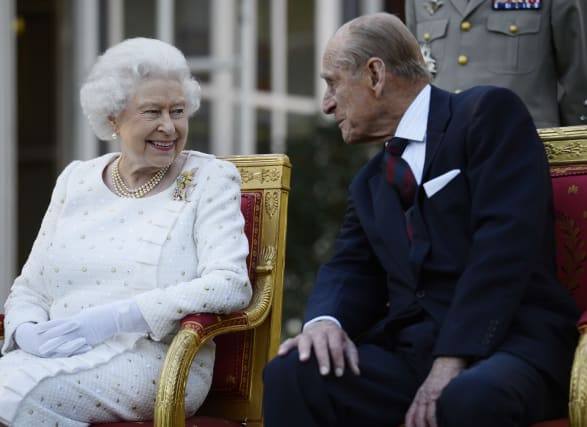 The Queen and the Duke of Edinburgh have spent more time under the same roof together during lockdown than they have in many years, a royal expert has said.

The couple, who have been married for more than 70 years, were poignantly photographed side by side at Windsor Castle to mark Phillip’s 99th birthday on Wednesday.

The duke had been spending much of his retirement at his cottage, Wood Farm, in the sanctuary of the Sandringham estate, more than 100 miles away from the Queen, who was usually at Buckingham Palace or at Windsor.

But they were reunited at the Berkshire castle three months ago for their safety after Philip was flown there by helicopter on March 19 ahead of lockdown.

Joe Little, managing editor of Majesty magazine, told the PA news agency: “This must be the longest they’ve been under the same roof for many years, I would say.

“But it’s an opportunity for them in their later years to reconnect.”

He added: “It is the perfect royal cocooning.”

The Queen and the duke are staying with a reduced household of around 20 staff, dubbed Operation HMS Bubble, and Mr Little said the monarch and Philip most likely have lunch or dinner together each day while spending other time on their separate interests.

Philip keeps himself busy reading, writing and painting, and even released a rare public statement in April – his first since his retirement – praising key workers and those making sure that essential services are kept running during the coronavirus pandemic.

As well as enjoying riding her fell ponies in Windsor Home Park, the Queen – the nation’s longest reigning monarch – has her official duties to deal with, including her red boxes of papers and regular telephone audiences.

The royal couple have been pictured at Windsor throughout the years including in the grounds of the castle more than 60 years ago in 1959, accompanied by Sugar, one of the many royal corgis.

The success of the Queen and Philip’s long-lasting marriage has often been put down to their differing personalities.

“The Queen is a much more laid-back character, while the duke has never suffered fools gladly,” Mr Little said.

“The Queen is much less confrontational so I suppose they are opposites in many ways but clearly the chemistry has worked for them as they are now in the 73rd year of marriage so that itself is quite remarkable.”

The royal commentator added that the Queen and duke had admitted tolerance is essential for their happy marriage.

“As they have said publicly at times of wedding anniversaries, it’s tolerance in abundance and plenty of patience as well,” Mr Little said.

“I suppose for them perhaps it’s always been a case of absence makes the heart grow fonder. They would go through periods of not really seeing much of each other.”

The romance of Prince Philip of Greece and Princess Elizabeth sprang out of a summer encounter at the Royal Naval College in Dartmouth in 1939.

Philip, who was just 18, was introduced to 13-year-old Elizabeth, who was visiting with her parents, King George Vi and Queen Elizabeth.

Handsome, blond-haired, athletic Philip caught Lilibet’s eye as he entertained her by jumping over tennis nets, and the young princess was smitten.

The pair, who are distant cousins, maintained a regular correspondence and met on several more occasions, with Philip later spending Christmas with the royals at Windsor in 1943.

But, by the end of the war, newspapers were already speculating about their romance, and their engagement was confirmed after the princess turned 21 and returned from a royal tour to South Africa.

Philip applied for British nationality and in February 1947 became a naturalised British subject, renouncing his Greek royal title, adopting the surname of Mountbatten and becoming known as Lieutenant Philip Mountbatten.

The couple married in Westminster Abbey on November 20 1947.

While on honeymoon, Philip wrote to tell his mother-in-law Queen Elizabeth, later the Queen Mother, of his deep love for his new wife.

“Lilibet is the only ‘thing’ in the world which is absolutely real to me and my ambition is to weld the two of us into a new combined existence that will not only be able to withstand the shocks directed at us but will have a positive existence for the good,” he said.

Philip has devoted his married life to supporting his wife, giving up his successful naval career to be by her side when the King’s health grew worse.

On the Queen’s accession, the duke watched her become the single most important woman in the country.

But Lord Charteris, the Queen’s former private secretary, once recalled: “Prince Philip is the only man in the world who treats the Queen simply as another human being.

“He’s the only man who can. Strange as it may seem, I believe she values that.”

In 2007, the couple celebrated their diamond wedding anniversary by travelling to Malta, where they had lived for a short time as a young couple.

In 2012, they marked their blue sapphire anniversary – 65 years – and in 2017 passed the rare, personal milestone of 70 years of marriage – their platinum wedding anniversary.