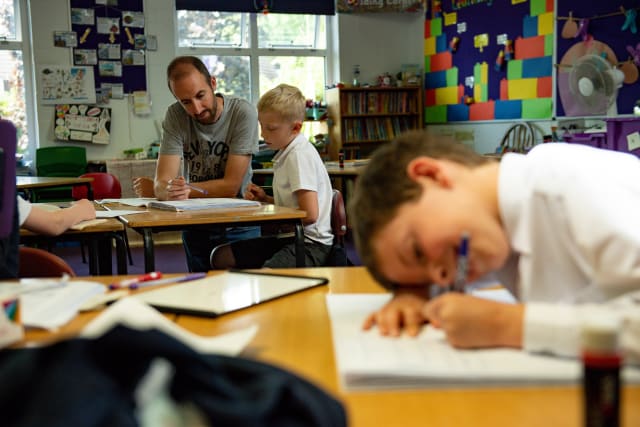 Critics have expressed “huge disappointment” after reports emerged that ministers are planning to row back on plans for all primary-aged pupils to return to school this term.

The aim had been for all primary pupils in England to spend four weeks in school before the summer break, but Education Secretary Gavin Williamson is expected to admit on Tuesday that not all children will go back.

However, Tory MP Robert Halfon, chairman of the Commons Education Committee, urged the Government to reconsider a mooted U-turn on the push to reopen classrooms.

He said the UK is a “strange country” for prioritising reopening pubs over schools.

Speaking to BBC Radio 4’s Today programme, the former minister said: “I think we’re a strange country in which we turn a blind eye to mass demonstrations all over in every city, we campaign for pubs and cafes to open and yet we say to open schools before September is too risky when all the evidence – from the World Health Organisation, from many other European countries, from the chief medical officer in the UK – suggests otherwise.

“I think the Government should definitely think again on this and continue with a phased reopening of schools because I think too many disadvantaged children are not getting an education.

“We could have an epidemic of educational poverty and be damaging the life chances of hundreds of thousands of young people.”

Department for Education guidance states that school classes should be capped at 15 pupils in order to follow coronavirus-related social distancing measures and keep children two metres apart at all times.

Some headteachers have complained that, after opening up to Reception, Year 1 and Year 6 last week, they do not have the “physical space” to take more children given that extra classroom space is having to be used to accommodate the smaller groups.

Addressing the issue of space constraints, Mr Halfon said: “I appreciate that not all schools can open because they may have old buildings, it may be very difficult.

“But just because you can’t do it everywhere, it doesn’t mean you shouldn’t open schools anywhere.”

Children’s Commissioner for England Anne Longfield said the reports are “a huge disappointment”, particularly when more of the economy is due to be reopened in the coming weeks.

She told the Today programme: “I think children are in danger of being forgotten in lifting this lockdown.

“We are seeing a situation where theme parks are going to be reopening in a month’s time, shops, pubs, restaurants, but still children not back in school.

“It will take an enormous challenge but it (reopening schools) needs to be Government’s number one priority now.”

Reverend Steve Chalke, founder of the Oasis chain of academy schools, predicted that some of his 30 primary schools could take on more children and that his staff are looking to utilise other community buildings as makeshift classrooms.

The Baptist minister told the Today programme: “I think there are other ways around dealing with this as well because what the Government has said about bringing children back – keeping them two metres apart, socially distanced but bringing them back – well, of course it is not possible to bring all children back into a school building and keep the social distancing – it is an oxymoron, you can’t do both things.

“But in any community there are other buildings that can be used – community halls, churches and other faith groups’ buildings, hotels.

“We’ve explored conversations with some people like that so you can bring children back in and use those buildings because their emotional and social development is so important.”

He said take-up of places had averaged at 70% in Reception, Year 1 and Year 6 across Oasis schools since they reopened last week.