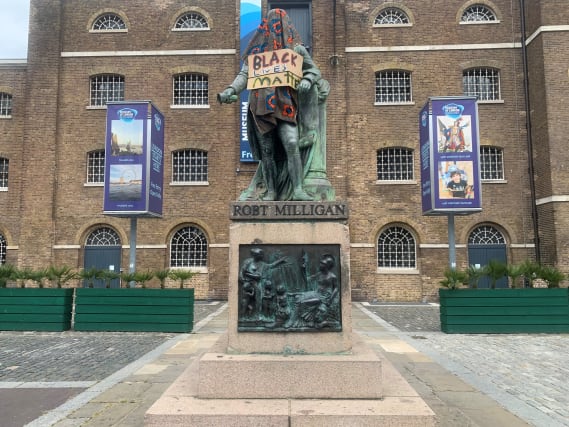 Labour councils across England and Wales will begin reviewing monuments and statues in their towns and cities, after a protest saw anti-racism campaigners tear down a statue of a slave trader in Bristol.

The Local Government Association's (LGA) Labour group announced on Tuesday it has asked Labour council leaders to work with their communities to review "the appropriateness" of monuments and statues in their areas.

A statement posted on Twitter, signed by LGA Labour deputy leaders Anntoinette Bramble and Michael Payne, said: "LGA Labour have consulted with all Labour council leaders, and there is overwhelming agreement from all Labour councils that they will listen to and work with their local communities to review the appropriateness of local monuments and statues on public land and council property."

It follows a similar decision by the Mayor of London Sadiq Khan, after his office announced on Tuesday that the newly-formed Commission for Diversity in the Public Realm will review landmarks in the capital, including murals, street art, street names, statues and other memorials.

The LGA announcement comes after one Labour council area is set to lose a controversial statue following a petition.

The statue of slave owner Robert Milligan at West India Quay, east London, will be taken down "as soon as possible", said its owner.

On Tuesday, charity Canal and River Trust, which owns the land where the statue is located, issued a statement on Twitter following a petition launched by Tower Hamlets Labour councillor Ehtasham Haque, which demanded the removal of the figure.

The statement read: "We recognise the wishes of the local community concerning the statue of Robert Milligan at London Docklands and are committed to working with London Borough of Tower Hamlets, the Museum of London Docklands and partners at Canary Wharf to organise its safe removal as soon as possible."

Commenting on the LGA Labour decision, Steve Reed MP, Labour's shadow secretary of state for communities and local government, said: "We welcome the decision by Labour councils to listen to their local communities to make sure monuments and statues on public land are appropriate and represent local people's values."

With the growing surge in support for the Black Lives Matter movement, which has sparked global protests following the death of George Floyd at the hands of Minneapolis police, a number of petitions have emerged online demanding controversial monuments in the UK are taken down.

One such petition is calling on Manchester City Council to remove the statue of two-time British prime minister Sir Robert Peel in Piccadilly Gardens.

The petition organiser Sami Pinarbasi described the statesman, who founded the Metropolitan Police Service, as an "icon of hate and racism".

Similar petitions with the hashtag #RepealPeel have been launched to remove statues in Leeds and Bradford.

'There is overwhelming agreement from all Labour councils that they will listen to and work with their local communities' - statement regarding public monuments from @LGA_Labour deputy leaders @AnntoinetteBra1 and @MichaelPayneUK after discussions with Labour council leaders pic.twitter.com/TAMzTNJdi2

Councillor Luthfur Rahman, from Manchester City Council, said: "We think it's important to undertake a citywide review of all the statues in Manchester and work with our cultural institutions to understand their history and context."

He continued: "We also want to take this opportunity to ask the public who is missing – who should be celebrated but is not – with particular thought around representing the proud BAME history of Manchester and help to reflect the shared story of our diverse and multicultural city."

The petitions have drawn inspiration from an anti-racism demonstration in Bristol on Sunday, which saw protesters topple the statue of slave trader Edward Colston before throwing it into the harbour.

It has prompted renewed calls for the statue of British colonialist Cecil Rhodes to be taken down from Oriel College at the University of Oxford, with a protest planned by campaign group Rhodes Must Fall outside the college on Tuesday evening.