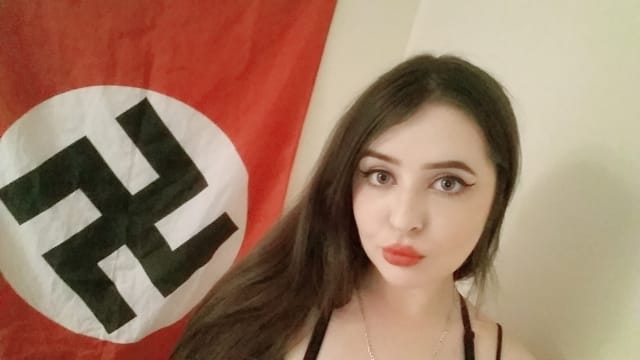 A former Miss Hitler beauty pageant contestant has been jailed for three years after being found guilty of membership of the banned neo-Nazi terrorist group National Action (NA).

Sentencing the four at Birmingham Crown Court on Tuesday, Judge Paul Farrer QC told them that, after NA was outlawed by the Government in 2016, “you weren’t prepared to dissociate yourselves from the vile ideology of this group and therefore defied the ban and continued as members”.

Addressing Cutter, he said: “You never held an organisational or leadership role”, but added that the 23-year-old was a “trusted confidante” of one the group’s leaders, as well as being in a “committed relationship” with Jones.

Turning to “highly intelligent” Jones, the judge said he had played “a significant role in the continuation of the organisation” after the ban.

All four had denied membership of NA, but had attended a post-ban meeting of senior leaders and members held in Birmingham in January 2017, the court heard.

The extreme right-wing group, labelled “racist, anti-Semitic and homophobic” by then-home secretary Amber Rudd, was banned after a series of rallies and incidents, including praise of the murder of MP Jo Cox.

Cutter, who entered the Miss Hitler beauty contest as Miss Buchenwald – a reference to the Second World War death camp – had denied ever being a member despite attending the group’s rallies, in which banners reading “Hitler was right” were raised.

Frustration over a lack of activism in her native Yorkshire led Cutter to join the NA’s Midlands sub-group, whose membership was “determined to defy the ban”, prosecuting barrister Barnaby Jameson QC said.

Jurors were also shown messages in which Cutter joked about gassing synagogues, using a Jew’s head as a football and remarking “Rot in hell, bitch”, after discussing Ms Cox’s murder.

Cutter also made an attempt to recruit a 15-year-old girl, albeit unsuccessfully, the judge heard.

Mr Jameson said it was “part of a pattern” by Cutter and Jones, both of Sowerby Bridge, near Halifax, West Yorkshire, of “targeting individuals for recruitment at a time when National Action was a banned organisation”.

The Crown prosecutor said it was “no coincidence” that Cutter entered the Miss Hitler beauty pageant before the ban under the name “Buchenwald Princess”, as Jones had visited the Nazi death camp in 2016.

Cutter was jailed for three years, while Jones was handed a five-and-a-half-year prison sentence.

Jones, a former member of the British National Party’s youth wing, was described as a “leader and strategist” who played a “prominent and active role”.

The 25-year-old, originally the group’s London regional organiser, acknowledged posing for a photograph while delivering a Nazi-style salute and holding an NA flag in Buchenwald’s execution room during a trip to Germany.

The railway engineer’s trial also heard that he had links to members of extreme right-wing groups in Ukraine and eastern Europe.

Mr Jameson said that even after the NA’s proscription, Jones designed propaganda for two splinter groups, NS131 and Scottish Dawn, which were also both later banned.

While still an NA member, Jones hand-picked his “successor” for London, before moving to Yorkshire to be with Cutter.

Jones, who grew up in foster care amid a backdrop of domestic violence by his biological father against his mother, also organised physical training for NA members, including boxing sessions in Swindon.

Jack, appearing via video-link from HMP Birmingham for sentencing, was described by Mr Jameson as a “committed member”, turning up to “almost every Midlands meet-up”.

The 24-year-old, of Heathland Avenue, Birmingham, also had a previous conviction, pre-ban, for plastering the city’s Aston University campus with the group’s racially-charged stickers, some reading “Britain is ours, the rest must go”.

Jailing him for four-and-a-half years, the judge told him: “You became a dedicated member and were wholly committed to their ideology.”

Scothern, of Bagnall Avenue, Nottingham, was “one of the most active members of the group”, said Mr Jameson, and “considered future leadership material”.

Another leading member of NA observed how Scothern had “driven himself into poverty” by travelling to member meetings and self-funding 1,500 stickers bearing Adolf Hitler’s image and calling for a “final solution” – in reference to the Nazis’ genocide of Jews.

Sentencing Scothern, Judge Farrer said: “You were enthusiastic about – and wholly committed to – the group.”

Handing the teenager an 18-month term of detention, he said: “I suspect it never occurred to you to let go of your extreme revolutionary ideology and, following proscription, your enthusiasm for National Action was undiminished.”

Speaking ahead of sentencing, Director of Public Prosecutions Max Hill QC described NA members as “diehards” who “hark back to the days of not just anti-Semitism, but the Holocaust, the Third Reich in Germany”.