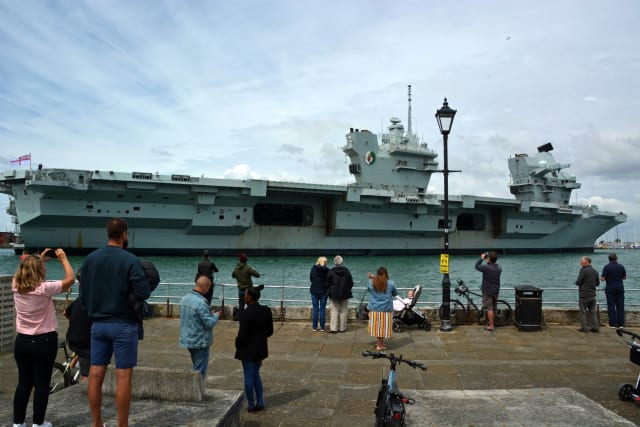 The jets from the 617 Squadron landed on board the 65,000-tonne warship which sailed from Portsmouth Naval Base on Sunday for flight trials off the south coast.

The aircraft that have landed on board will be the same that will sail with the carrier next year on its maiden carrier strike group deployment.

Commander Mark Sparrow, commanding officer of 617 Squadron, said: “We are excited to be on board the carrier and we have been training hard to be here.

“This is the first time the ship’s operational squadron has embarked and worked together.

“The F-35 brings next generation capability to UK Defence through its ability to find, destroy or avoid enemy air defences and enemy aircraft whilst gathering intelligence data.”

“We are at the heart of a world-leading capability for the UK and will soon have on our decks two squadrons of F-35s – from the UK and US – plus the protection of a strike group made up of destroyers, frigates and support ships.”

The £3 billion warship has just completed a series of sea trials before it returned to Portsmouth at the end of last week to embark pilots, engineers and support staff for the flight trials.

The tests are aimed to demonstrate that the jets can successfully defend the carrier through combat air patrols and the ability to take off at short notice, as well as check their ability to work alongside the ship’s Merlin helicopters of Culdrose-based 820 Naval Air Squadron.

The Queen Elizabeth is set to return to base by the end of June before embarking the jets again later this year for a multinational training exercise with US, European and Nato allies.