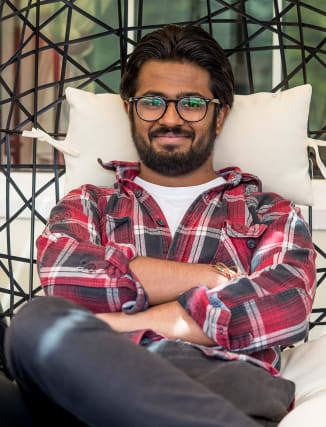 A 26-year-old doctor who needed life support after contracting Covid-19 has warned that even those who were previously fit and healthy can face a long road to recovery.

Dr Shanath Ramachandran, a trainee doctor at Leighton Hospital in Crewe, first began feeling unwell on April 5 following a busy week treating patients, and was hospitalised himself a week later.

In an interview with the journal Anaesthesia Reports, Dr Ramachandran said he knew about the risks from Covid-19, but felt reassured because of his age and the fact he had no underlying health conditions.

“At the time I fell ill, I was unaware of the link between members of the black, Asian, and minority ethnic (BAME) community and the risk of becoming seriously unwell with Covid-19,” he said.

“This directly affects me, as I am of South Asian descent with both my parents born in Sri Lanka.”

Dr Ramachandran said infection policy at the time said surgical facemasks did not need to be worn when treating patients who were not confirmed to have coronavirus.

“Both national and local policy have since changed to incorporate wider use of respirator masks, possibly indicating that surgical facemasks were not providing adequate protection in the context of a high population prevalence of (Covid) infection,” he said.

Dr Ramachandran’s first symptoms included fatigue, nausea and vomiting – with fever, muscle pain and breathlessness developing over the course of a week.

Aware he was becoming seriously ill, he called an ambulance on April 12 and was transferred to Wythenshawe Hospital in Manchester.

However, within 12 hours he had significantly deteriorated despite receiving oxygen, and was transferred to intensive care and put on a ventilator.

“It had never previously occurred to me that I might deteriorate to this state; hence this news caused much anxiety to myself and my family,” he said.

“The brief telephone conversation with my family, including a forced positive message, was my last clear memory prior to intubation.”

He also underwent further physiotherapy and speech therapy before being discharged, after which he spent six weeks recovering at his parents’ house.

Dr Ramachandran said: “My mobility was much less than before, and I had lost between 10-15kg whilst in hospital.

“My voice was incredibly hoarse and quiet, and I was occasionally struggling to swallow fluids.”

Over the next six weeks, he rested and slowly built himself up from only being able to walk 100m to running three to four miles a day now.

Dr Ramachandran said: “My recovery has been a slow, arduous and often frustrating process.

“I am much better now, however there is still some way to go; there are often days when I get tired very quickly with basic tasks.

“I am struggling with sleep and am yet to put on some of the muscle weight which I lost whilst in hospital. I’ve been advised that some of this can take up to a year to get back to normal.”

Looking back on what happened, Dr Ramachandran said: “One of the issues I immediately noticed was a real and a perceived ‘lack of control’ which I found difficult to process.

“When caring for patients I am able to plot their progress and anticipate their clinical improvement or deterioration.

“This was not something I could do as a patient; this led to uncertainty in my own mind and enhanced the fears that I already possessed regarding my clinical condition.”

Dr Ramachandran said his own anxiety was running high due to the fact one of his patients – somebody younger than himself – had died from Covid-19 just before he himself fell ill.

He added: “Being admitted to critical care was an entirely new experience for me.

“As well as dealing with the challenges of being severely unwell, I had to deal with the added issue of being a doctor, who had treated numerous patients with the same illness prior to admission.

“When the country initially went into lockdown and the NHS was gearing up for the peak, I was aware that there was a high likelihood of catching Covid-19.

“However, I did not feel as though this would affect me severely as I was normally fit and well and have never smoked.

“As this case and others prove, however, this disease can affect anybody regardless of how healthy they previously were; further, the consequences of this infection can be stark.”

Dr Ramachandran said he was still working through “a myriad of mental and physical health issues”, adding: “It is vital the public continue to be wary of this potentially debilitating disease.”

Archbishop of York warns of ‘tribal and divided’ church