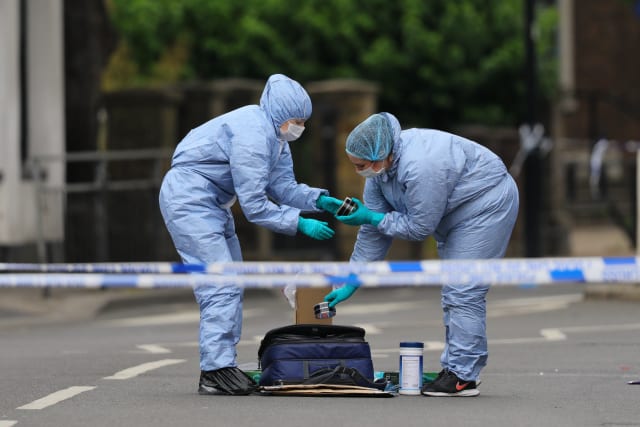 Detectives investigating a fatal street shooting in west London have released a CCTV image of a white Range Rover near the scene.

A man in his twenties was gunned down in Askew Road, Shepherd's Bush, at around 12.40am on Monday.

Witnesses said they heard someone screaming "help me, help me" in the wake of the shooting, as passers-by tried to give the victim CPR.

Police, a land ambulance and the air ambulance were called to the scene, but he was pronounced dead less than an hour later at 1.26am.

His family have been told.

Detectives have released a CCTV still of a white Range Rover Evoque that was found burnt out three miles away in Ascott Avenue, Ealing, at around 1.05am.

Detective Chief Inspector Wayne Jolley said: "I am urging anyone who witnessed what happened or who holds information regarding the white Range Rover to come forward.

"A young man has been brutally murdered in the street and his family and friends deserve to know what has happened.

"His family are truly devastated and ask that their privacy is respected while they come to terms with their loss."

Central West Borough Commander Helen Harper said there would be increased police patrols in the area in the wake of the shooting.

She said: "This is a tragic incident and my thoughts are with the young man's family and friends.

"I wish to reassure the public that police are working round the clock to find those responsible for this.

"Please do get in touch if you saw or know what happened, no matter how small you feel it may be, it could be the piece that officers need."

Anyone with information can call police on 101 quoting CAD224/08June, or to remain anonymous contact Crimestoppers on 0800 555 111 or online.