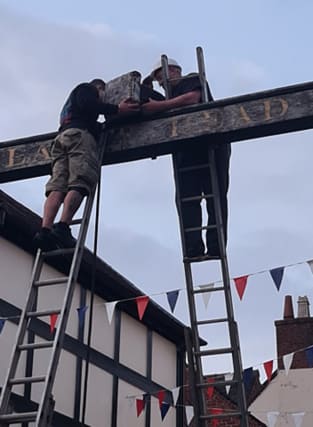 A local authority did not stop the public from taking down a ‘racist’ sculpture in order to avoid confrontation, as local residents took it upon themselves to ‘save’ the controversial figure.

Thousands of people signed a petition demanding the removal of a caricature of a black man above the 18th century Greenman pub sign in Ashbourne, Derbyshire, describing it as ‘racist’.

Derbyshire Dales District Council (DDDC) said on Monday it would remove the sign with “immediate effect” but when the head was taken down on Monday evening, locals said they had done so to protect it.

Around 150 people gathered outside the pub with ladders to take the sculpture down.

DDDC said in a statement that a councillor did not object when the group decided to remove the figure for themselves in a bid to avoid confrontation.

The statement read: “We were made aware last night [Monday] by one of our own Ashbourne councillors that approximately 150 locals had gathered by the The Green Man & Black’s Head sign in the town.

“The councillor was able to speak to the group and explain our position – that we needed to take urgent action to take down the head figure temporarily in the interests of public safety ahead of a consultation.

“The group, who had ladders, then decided they would remove the figure themselves for safe keeping and, not wanting to create a confrontation, in the circumstances we did not object.”

Police were called to St John Street on Monday night at around 9pm and remained at the scene for two hours.

A Derbyshire Constabulary spokesman said: “Officers were in attendance from 9pm until 11pm and were there to monitor the situation and ensure there were no breaches of the peace. There were no arrests.”

The Grade II-listed pub sign, which arches over St John Street, depicted the face of a black man, which one campaigner said resembled a golliwog, a 19th-century rag doll which is now largely considered racist.

A second petition was launched by 17-year-old Ashbourne resident Shaun Redfern to stop the figure from being permanently removed.

His father, Mark Redfern, said the head was “in the hands of the man who will restore [it]”.

He added: “He is a long-standing member of the community, everyone in Ashbourne knows him, the local councillors were also there too.”

In a Facebook post, Mr Redfern said the head would be given “a lick of black paint” and claimed the move was to save it from vandalism.

DDDC said the sculpture will be handed over to the council on Tuesday.

The council said in its statement: “The sign was gifted to the district council a number of years ago and we expect to have possession of the head figure later today [Tuesday].

“We need to decide the next steps, including any consultation process.

“For clarity, if any decision was taken in the future to remove the head permanently, it would need listed building consent and, as a Grade II* listed structure, would require consultation with Historic England.

“Because it has a Grade II* listing, we cannot grant consent to ourselves without referral.”

The petition against the head, which had amassed more than 40,000 signatures by Tuesday morning, drew inspiration from an anti-racism demonstration in Bristol, which saw protesters topple the statue of slave trader Edward Colston before dragging and heaving the bronze monument into the harbour.

Historic England said the “rare and distinctive” gallows sign was placed across the main road in 1825.

A Historic England spokesman said: “We understand that the carved head at the centre of the sign has been a source of contention and has upset many.

“England’s buildings, monuments and places sometimes bring us face-to-face with parts of our history that are uncomfortable or shameful by today’s standards.

“We have been informed by Derbyshire Dales District Council that the head has been removed and they have it in safe keeping.

“As the Government’s adviser on heritage, we will be ready to advise the council on next steps if they need it.”