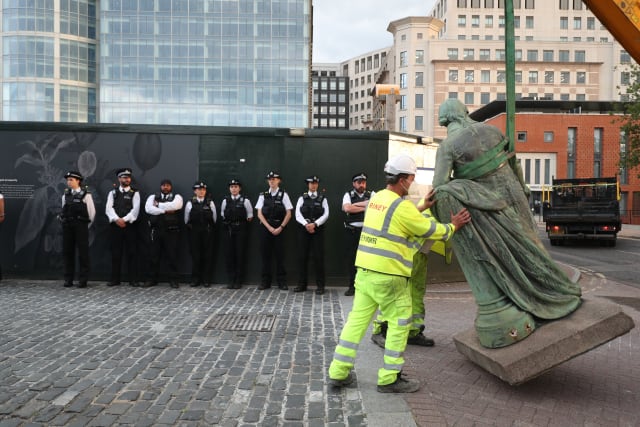 More controversial statues could be taken down after a raft of councils vowed to review such monuments amid anti-racism protests across the country.

Two slave trader statues have been pulled down in recent days – one by campaigners at an anti-racism protest and another with the approval of a local authority following a petition demanding its removal.

Labour-led councils across England and Wales have agreed to work with their local communities to look at the “appropriateness” of certain monuments and statues on public land and council property.

The review, announced by the Local Government Association’s (LGA) Labour group, came as the killing of George Floyd in the US continued to provoke demonstrations against inequality.

Activists who tore down the monument to slave trader Edward Colston in Bristol on Sunday – who were condemned by Boris Johnson – were referenced at Mr Floyd’s funeral.

Civil rights activist Rev Al Sharpton, who preached at the service on Tuesday, said: “I’ve seen grandchildren of slave masters tearing down a slave master statue over in England and put it in the river.”

Rev Sharpton said Mr Floyd’s death, after a police officer held his knee on his neck for several minutes, had touched the world.

Meanwhile rapper Wretch 32, whose real name is Jermaine Scott, shared a video of his father Millard Scott being Tasered by police in north London in April, telling ITV there has been “no progression” since he grew up watching his father and uncle “fight against police brutality”.

To coincide with Mr Floyd’s funeral protesters in London observed a minute’s silence on their knees before marching from the statue of Nelson Mandela in Parliament Square to Downing Street.

The statue of slave owner Robert Milligan was quickly taken down from West India Quay in London’s Docklands on Tuesday evening, after the charity that owns the land where it stood promised to organise its “safe removal” following a petition launched by Tower Hamlets Labour councillor Ehtasham Haque.

After its removal the borough’s mayor John Biggs said: “We now need a wider conversation about confronting this part of our history and the symbols that represent it.”

Mayor of London Sadiq Khan, who has announced a review of landmarks in the capital, said: “It’s a sad truth that much of our wealth was derived from the slave trade – but this does not have to be celebrated in our public spaces.”

The leader of Labour-led Exeter City Council is calling for a review into the future of the city’s famous statue of General Sir Redvers Buller, who was a lieutenant-colonel in the Zulu campaign of 1878 and general commanding of the Natal army in South Africa between 1899 and 1900, according to the National Archives.

In Oxford, hundreds of protesters demonstrated at the city’s university, demanding the removal of a statue of Victorian imperialist Cecil Rhodes.

Ahead of the protest, the leader of Oxford City Council, Susan Brown, invited the college to apply for planning permission to have the statue removed, suggesting it should be placed in the Ashmolean or the Museum of Oxford.

Governors at Oriel College said the institution “abhors racism and discrimination in all its forms” but added that the college continues to “debate and discuss” the presence of the Rhodes statue.

A number of petitions have emerged demanding controversial monuments in the UK are taken down, including calls to remove a statue of two-time British prime minister Sir Robert Peel in Manchester’s Piccadilly Gardens.

Petition organiser Sami Pinarbasi described the statesman, who founded the Metropolitan Police Service, as an “icon of hate and racism”.

Similar petitions with the hashtag #RepealPeel have been launched to remove statues in Leeds and Bradford.

In Edinburgh, city council leader Adam McVey told the BBC he would feel “no sense of loss” if a statue to Henry Dundas, who delayed the abolition of slavery, was removed.

Stand Up To Racism is calling on people across Britain to “take the knee” at 6pm on Wednesday on their doorstep, at their workplace or in their local area in a show of solidarity with the Black Lives Matter movement and in a demand for change.