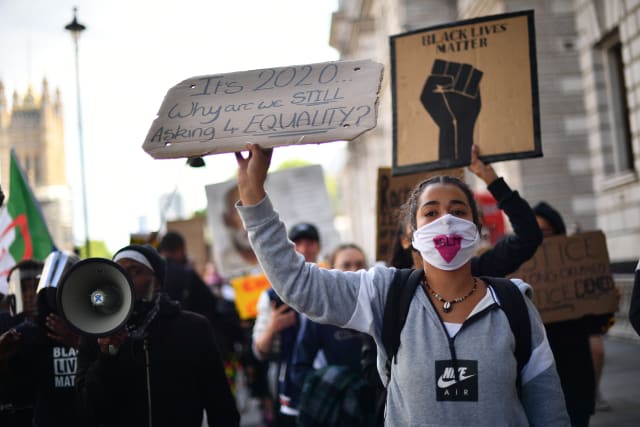 Mourners have commemorated the life of George Floyd in central London on the day of his funeral in the US.

Around 50 activists, some with “Black Lives Matter” signs, knelt at the foot of Nelson Mandela’s statue in Parliament Square, Westminster, on Tuesday.

They observed a minute’s silence in Mr Floyd’s memory at 5pm before marching to Downing Street chanting “I can’t breathe” and “the UK is not innocent”.

Mr Floyd died aged 46 on May 25 after a white police officer in Minneapolis knelt on his neck for several minutes as he cried out “I can’t breathe”.

His death has sparked protests around the world, including in central London where thousands marched at the weekend.

A small number of people also attended the memorial event to oppose the movement and one man among them was arrested after an altercation with police officers.

Herman Williams, 35, led many of the chants and said he wanted to fight for justice for his father of the same name, who he said was a victim of the Windrush scandal.

Amid chants of “come out Boris”, he said: “There needs to be a public inquiry into my father’s death.

“I support Black Lives Matter, because this is black life. I am black life.

“I want the Government to make new legislation. The Government always say one thing, then don’t act on what they say – just like when they apologised and said they are going to compensate us (the Windrush generation).”

A bystander who identified himself as T Briggs urged the crowd to avoid violence ahead of the event.

He told the PA news agency: “It’s devastating, it’s disappointing the way police have been treating black people in the case of George Floyd in America.

“But the Americans have been looting and being violent. We cannot be like that in the UK.

“If you want to carry out a protest, do it peacefully. That’s the only way your voice can be heard.”

Another protester – who gave her name only as Adassa, 64 – said she joined the march despite the coronavirus pandemic because racism is “worse than the virus”.

She said: “My son got stopped (by police) three weeks ago … they had him in a handcuff like he was a criminal, telling everybody: ‘that boy is going around robbing’.

“Not everybody is the same. We’re here for justice and equality. We want to make a change and to make a difference.”