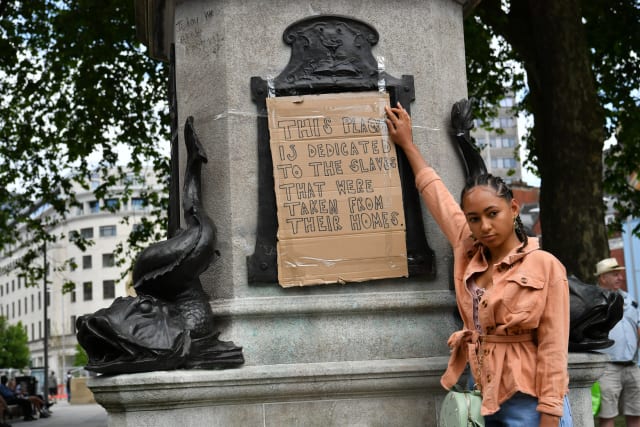 A sign has been taped over a plaque that praises slave trader Edward Colston as one of Bristol’s most “virtuous and wise” citizens.

The plaque is situated on a plinth on which a bronze memorial to Colston stood until it was pulled down, dragged through the city and dumped in the harbour during a Black Lives Matter protest on Sunday.

It states: “Erected by citizens of Bristol as a memorial of one of the most virtuous and wise sons of their city AD 1895.”

On Monday afternoon, two Bristolians taped a cardboard sign over the plaque, reading: “This plaque is dedicated to the slaves that were taken from their homes.”

As they finished attaching the sign, those who had gathered around the plinth cheered and clapped.

Marcellous Runcie, 31, and his partner Asha Gwatkin, 25, from Bristol, said they wanted to commemorate the victims of slavery.

“We wanted to change the narrative to a positive one, not a negative one, and that’s what we’ve felt we’ve done by changing what this statue was.”

She invited people to come to the area of the plinth and to talk to each other about racism and stereotypes and views of what they perceive black people to be.

Mr Runcie said he was moved by a placard speaking of how slaves were “packed in like sardines” to the ships.

“My mum told me the magnitude of this statue when I was a kid and I chose to forget it, I chose to ignore it like all of us are guilty of when it comes to injustice,” he said.

“The fact that it’s now in the bottom of the river, it feels like a win.”