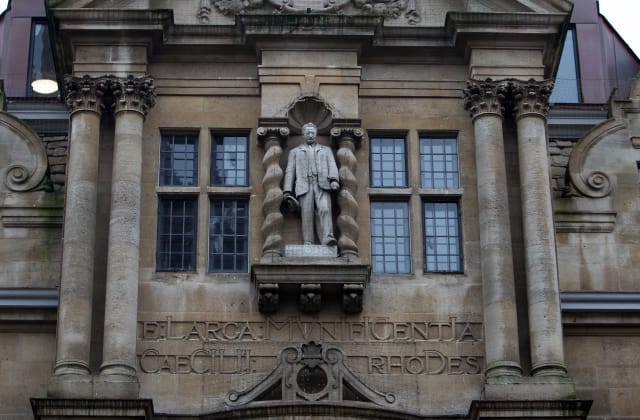 Calls to remove the statue of imperialist Cecil Rhodes from an Oxford college have been reignited amid anti-racism demonstrations.

The Rhodes Must Fall Oxford campaign group, alongside other student groups, argue that the university has “failed to address its institutional racism” and the impact on students and the city.

An open letter from campaigners to the university’s vice-chancellor says the institution has only made “inconsequential inroads” into tackling the material legacy of imperialism, adding it “is not enough”.

Thousands of people have signed two new petitions calling for the statue of British colonialist Cecil Rhodes at Oriel College to be taken down.

It comes after a statue of 17th century slave trader Edward Colston was pulled down and thrown into Bristol harbour during a Black Lives Matter protest on Sunday.

Demonstrators will protest in front of the Rhodes statue in Oxford on Tuesday as part of the Black Lives Matter movement. They want iconography that “glorifies” Rhodes to be removed from the university.

It comes amid a wider “decolonise” movement sweeping universities across the world in recent years.

The Rhodes Must Fall movement was established in 2015 at Cape Town University, and later spread to Oxford, where students demanded that the statue of Rhodes was removed from Oriel College.

In 2016, Oriel College decided to keep the statue despite widespread student demands to remove it. Campaigners from the Rhodes Must Fall group argued the row illustrated Britain’s “imperial blind spot”.

Femi Nylander, one of the original Rhodes Must Fall campaigners, said the university made “a series of promises” to black students around the curriculum and access and representation following the movement in 2015.

But he has said these never materialised and the statue was not removed.

The open letter to the university, signed by more than 6,600 individuals and organisations, outlines five steps that campaigners want the university to take to “make upholding anti-racist values a reality”.