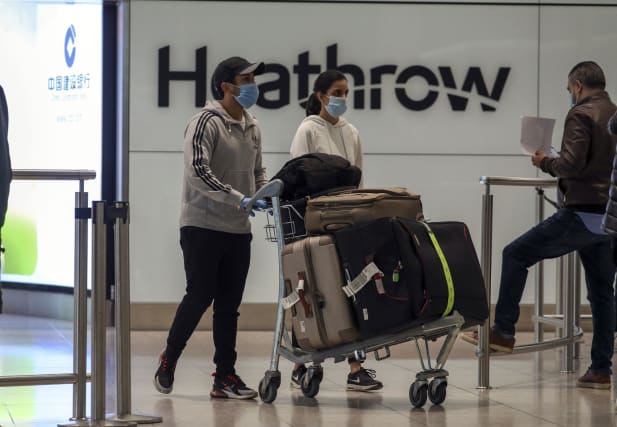 Requiring travellers arriving in the UK to go into quarantine will cost millions of tourism jobs, Ryanair boss Michael O’Leary has warned.

He said his airline is experiencing a “collapse of inward bookings” for flights this summer, because people are being told to self-isolate for 14 days under Government measures to guard against a second wave of coronavirus.

All passengers, bar a handful of exemptions, now have to fill out an online locator form giving their contact and travel details, as well as the address of where they will isolate.

Mr O’Leary told Good Morning Britain: “We’re seeing thousands of British families booking their holidays in Portugal, in Spain and Italy, but there’s almost a collapse of inward bookings bringing those Italians, bringing those Europeans here to the UK, on which Britain’s tourism industry depends, particularly in the peak months of July and August.

“What’s irrational about it is all of those countries have a much lower Covid rate than the UK.”

He added: “Millions of jobs are going to be lost in British tourism because British hotels, British guest houses, British visitor attractions – all over London, the Globe, the London Eye, Madame Tussauds – will be empty, because the hundreds of thousands of Italians and Spanish and French people you get coming to Britain every July and August simply won’t travel.”

Ryanair has joined with easyJet and British Airways’ owner IAG in starting legal proceedings in relation to the policy.

They sent a pre-action letter to the Government, the first step in an application for judicial review, urging it to reverse the “defective” measures.

People who fail to comply with the new rules could be fined £1,000 in England, and police will be allowed to use “reasonable force” to make sure they follow the rules.

Border Force officers will carry out checks on arrivals and may refuse entry to a non-resident foreign national who refuses to comply with the regulations.

Failure to complete the locator form will be punishable by a £100 fixed penalty notice.

Lucy Moreton, professional officer at the Immigration Services Union, said Border Force staff checking quarantine papers were “angry” at the way they were being treated.

She told BBC Radio 4’s Today programme that technical papers explaining to staff what to check for only arrived on Friday, and were still not available to those operating on the front line of the devolved administrations.

Ms Moreton added: “This does appear to be very shambolic and they don’t want to be blamed for that.”

A leaked Home Office document seen by The Daily Telegraph reportedly said there was no method for officials to ensure a person’s details are “genuine”.

The quarantine regulations must be reviewed every three weeks, with the first taking place by June 29.

They could be in place for a year, when the legislation expires, unless the Government decides to scrap them sooner.

Travellers arriving from within the Common Travel Area, which includes Ireland, the Isle of Man and the Channel Islands, will not need to self-isolate unless they have arrived in the CTA in the last 14 days.

Home Secretary Priti Patel said: “We all want to return to normal as quickly as possible. But this cannot be at the expense of lives.

“The science is clear that if we limit the risk of new cases being brought in from abroad, we can help stop a devastating second wave.

“That is why the measures coming into force today are necessary. They will help control the virus, protect the NHS and save lives.”

– Heathrow boss John Holland-Kaye said about 25,000 jobs could be at risk at the west London airport, and warned that the scale of cuts could have a “devastating impact on local communities”.

– The Department of Health and Social Care said another 77 people had died after testing positive for coronavirus in the UK as of 5pm on Saturday, the lowest daily total since March 23, though figures are regularly lower at weekends.

– No new coronavirus deaths were reported in Scotland for the first time since lockdown began, according to the latest Scottish Government figures. There were also no new Covid-19 deaths reported in Northern Ireland.

– The global death toll passed 400,000, according to data collected by Johns Hopkins University.

– Thousands of anti-racism protesters attended rallies across the UK on Sunday, despite the Health Secretary Matt Hancock saying there was “undoubtedly a risk” that it would lead to an increase in Covid-19 cases.