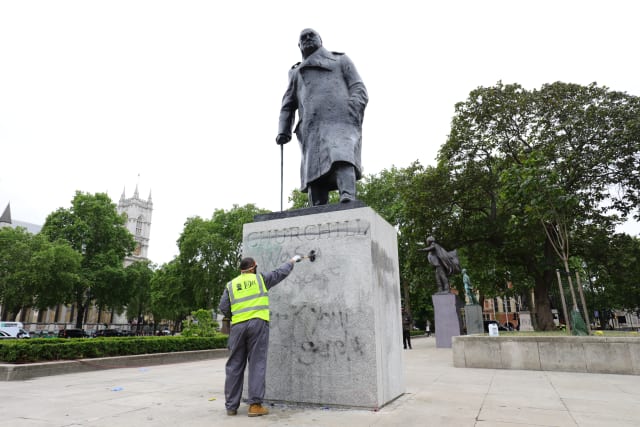 The Prime Minister said anti-racism demonstrations have been “subverted by thuggery” after protesters tore down a statue of a slave trader in Bristol and clashed with police in the capital.

Scotland Yard said 12 people were arrested and eight officers injured as bottles and other objects were thrown in central London on Sunday.

Graffiti was scrawled on the statue of Sir Winston Churchill in Parliament Square, while in Bristol protesters toppled the bronze memorial to slave trader Edward Colston and dumped it into the harbour.

Marvin Rees, the Mayor of Bristol, said he felt no “sense of loss” for the statue, but told BBC Radio 4’s Today programme: “As an elected politician, obviously I cannot condone the damage and I am very concerned about the implications of a mass gathering on the possibility of a second Covid wave.”

Home Secretary Priti Patel has branded the incident “utterly disgraceful”, while crime, policing and justice minister Kit Malthouse called on Monday for those responsible to be prosecuted.

John Apter, the chairman of the Police Federation, which represents rank-and-file officers in England and Wales, criticised Avon and Somerset Police for its decision not to intervene in the protest.

He told BBC Breakfast: “To have no police presence there I think sent quite a negative message.

“I understand there has been a lot of controversy about this statue for many years – so the question is: why didn’t those in the local authority consider taking it down long before, rather than waiting for these actions?”

Black Lives Matter demonstrations were carried out peacefully for much of Sunday afternoon in London.

But there were a number of clashes with police on Whitehall, with bottles thrown at officers in one incident near the Cenotaph just before 9pm.

On Sunday evening, Boris Johnson tweeted: “People have a right to protest peacefully & while observing social distancing but they have no right to attack the police.

“These demonstrations have been subverted by thuggery – and they are a betrayal of the cause they purport to serve.

The Metropolitan Police said 12 people were arrested and eight officers were injured on Sunday, with most of the arrests related to public order offences, while one was for criminal damage following an incident at the Cenotaph.

Mr Malthouse said he believed more arrests will follow once footage has been examined.

“It is pretty obvious that a small group showed up intent on violence,” he told BBC Breakfast.

“We know that because they turned up with fireworks and smoke bombs and various other bits of equipment.

“In those circumstances the police have to act proportionately in a largely peaceful crowd and make sure they address the small number who are being violent.”

It comes after Scotland Yard said 29 people were arrested and 14 officers were injured during clashes between police and protesters on Saturday.

Pop star Lewis Capaldi was pictured alongside protesters at Holyrood Park in Edinburgh, while rapper Stormzy attended the London protest.

London Black Lives Matter also organised an online protest via Zoom for those unable to attend the demonstrations, which attracted more than 10,000 people.

Elsewhere, the operational patrol unit of Warwickshire Police tweeted the M6 southbound was temporarily closed soon after 6pm due to pedestrian protesters blocking the carriageway at Junction 3.

In Manchester, hundreds crowded into St Peter’s Square, kneeling in silence as a mark of respect for African-American man George Floyd, who died after a white police officer held him down by pressing a knee into his neck on May 25.

Shadow chancellor Anneliese Dodds has said the country “is crying out for a leader that will seek to unite communities” in the wake of the Black Lives Matter protests.

Speaking on BBC Breakfast, she said: “People are hurting, so please let’s seek to heal those divisions and unite people and then move forward as a country.”