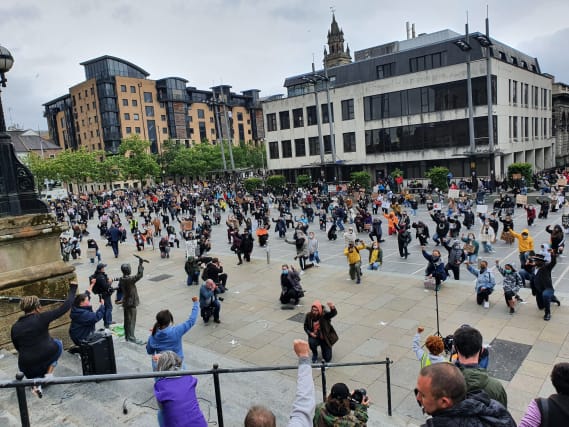 Northern Ireland’s First Minister has backed the response of police to anti-racism rallies as “proportionate”.

The demonstrations were in solidarity with the Black Lives Matter campaign following the death of George Floyd while in police custody in the US city of Minneapolis.

The Police Service of Northern Ireland has faced criticism from some politicians for issuing 60-70 fines to protesters in Belfast and Londonderry.

Amnesty International and Committee on the Administration of Justice have expressed concern about the laws used.

While Ciaran Moynagh, a solicitor from Phoenix Law – which offered free legal advice to protesters, questioned the difference between those gathering for a protest and those taking part in long queues for some shops.

Arlene Foster said she considers the police operation on Saturday was a “proportionate reaction to the fact that regulations were being breached by those who had been asked by the executive members to find a different way to protest”.

“We can all understand why there was a desire to protest and to make their voices heard but at the same time that was against the coronavirus regulations in relation to mass gatherings,” she said.

“I do note however in Belfast there was at least an element of social distancing unlike in other places in the United Kingdom like London, and of course the behaviour in London was quite disgraceful.

“But there was a breach of the law, I think police acted in a proportionate way.”

Deputy First Minister Michelle O’Neill said on Saturday she had joined an online protest in solidarity with the Black Lives Matter campaign.

She added: “I think that in any ordinary circumstances I would have been on the streets protesting along with everybody else, but the regulations are in place to try and save lives, and I think that the approach at the weekend was proportionate but I do think it needs to be consistent – if people break the rules, then the policing response to that needs to be consistent.”