Neo-Nazi ‘diehards’ to be sentenced for terrorist group membership 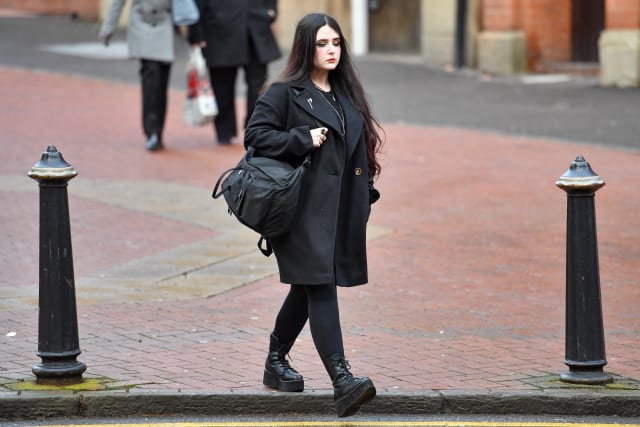 Four neo-Nazi “diehards” are to be sentenced for being members of the banned terrorist group National Action.

Alice Cutter and her ex-partner, Mark Jones, are due to appear at Birmingham Crown Court on Monday along with Garry Jack and Connor Scothern.

The extremist group, whose members have been described as “diehards” by the Director of Public Prosecutions (DPP), was banned in December 2016 after a series of rallies and incidents, including publicly praising the murder of MP Jo Cox.

Former Miss Hitler beauty pageant contestant Cutter, her Nazi-admiring ex Jones, both of Sowerby Bridge, near Halifax, West Yorkshire, as well as Jack and Scothern, were all convicted after a jury trial back in March.

Cutter, 23, who entered the beauty contest as Miss Buchenwald – a reference to the Second World War death camp – had denied being a member of National Action, despite attending the group’s rallies, in which banners reading “Hitler was right” were raised.

Jurors were also shown messages in which she joked about gassing synagogues, and using a Jew’s head as a football.

In one exchange with another National Action member on the day after Ms Cox was murdered, referring to the politician, Cutter said: “Rot in hell, bitch.”

Her ex-partner, 25-year-old Jones, a former member of the British National Party’s youth wing, was also convicted of being a member, after being described by prosecutors as a “leader and strategist”.

Jones, the group’s London regional organiser – who later moved to Yorkshire – acknowledged posing for a photograph while delivering a Nazi-style salute and holding a National Action flag in Buchenwald’s execution room during a trip to Germany in 2016.

Jack had previously been given a suspended jail term for plastering Birmingham’s Aston University campus with racially-aggravating National Action stickers in July 2016, some of which read “Britain is ours, the rest must go”.

He distributed the stickers with Alexander Deakin and Daniel Bogunovic, also since convicted of being senior group members, and another man, Chad Williams-Allen, of Bird End, West Bromwich.

Jurors read a message from Scothern, sent after the group was banned, in which he said: “Even if this land is lost, which I don’t think it is, I’d rather die than capitulate.”

Speaking about the group, DPP Max Hill QC said: “They are diehards in the way that they think.

“They hark back to the days of not just anti-Semitism but the Holocaust, the Third Reich in Germany, and they take their mindset from those extreme Nazi groups and latterly neo-Nazi groups in Germany.”

He told BBC Radio 4’s Today programme: “They are doing this for a particular purpose, which is to terrorise the people around them.

“And that’s why the label of terrorism is so important.”

Speaking about the relative youth of the group’s members, he said: “The websites that they create are deliberately made attractive to younger people so we see people as young as in their mid-teen years who are being radicalised, who are developing a mindset and coming into terrorist activity.”