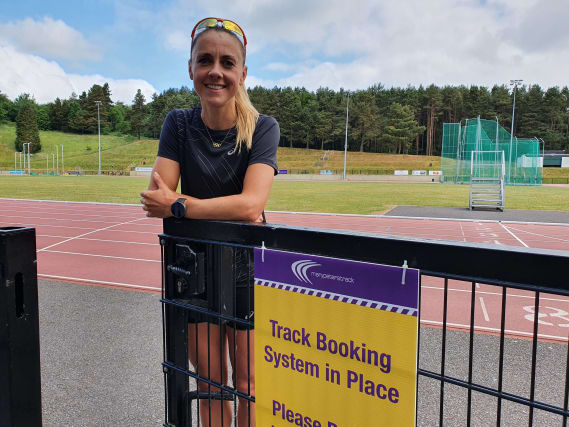 Sportspeople in Northern Ireland are returning to training after lockdown eased significantly on Monday.

The country’s main outdoor athletics track reopened, while large retailers like car showrooms and Debenhams in Belfast were also given the go-ahead to resume trading.

People queued for entry to the department store selling clothes and furniture in a city centre which has been largely empty for weeks barring recent anti-racism rallies.

Mary Peters Track, named after the Olympic gold medal-winning pentathlete from the city, is Northern Ireland’s pre-eminent venue for athletes.

Kerry Woods, a director at Athletics Northern Ireland, said: “It has been a very difficult time for our athletes, to try and find an alternative venue.

“It has been very challenging for a lot of them.

“We are delighted to have it back and up and open.”

Only 12 are allowed at the same time, with a maximum of six sportsmen and women and coaches working together.

Sand pits for long jump remain closed, and athletes have to take their own equipment and use hand cleaners.

Normally at this time of year up to 28,000 people would use the south Belfast venue.

It hopes to enable the squad to train together by the end of this month and participate in closed-doors matches at the Aviva Stadium in Dublin from August.

Chief executive Jonny Petrie said: “In the unprecedented circumstances we all find ourselves in as a result of coronavirus, it is important that we as a club make decisions which place the long-term interests of our supporters at the forefront.”

Among other measures introduced from Monday, around 80,000 of the most vulnerable people who have been staying indoors for nearly 12 weeks are permitted outside with someone from another household.

Dental surgeries can open for face-to-face urgent dental care in the first part of a three-stage reopening process.

The relaxed measures are more conservative than those in the Republic of Ireland, where from Monday a wider variety of retail shops can open.

Stormont ministers meet on Monday and are under pressure to allow a date for the reopening of all retailers.

On Sunday, Deputy First Minister Michelle O’Neill told RTE News that she sees the reopening of smaller retailers like shoe and clothes shops as another important step on the road to recovery.

Restrictions on visitors coming into Northern Ireland from outside the Irish and UK Common Travel Area have been introduced to a chorus of opposition from airlines.

Breaking mandatory two-week self-isolation early could mean a fine of up to £1,000.

Between 60 and 70 fines were imposed at Black Lives Matter demonstrations over the weekend in Belfast and Londonderry.

He asked: “Are you telling me I can’t walk through that area because there might be a gathering?

“Either you give the ticket to everybody there or you don’t give it to anyone.”