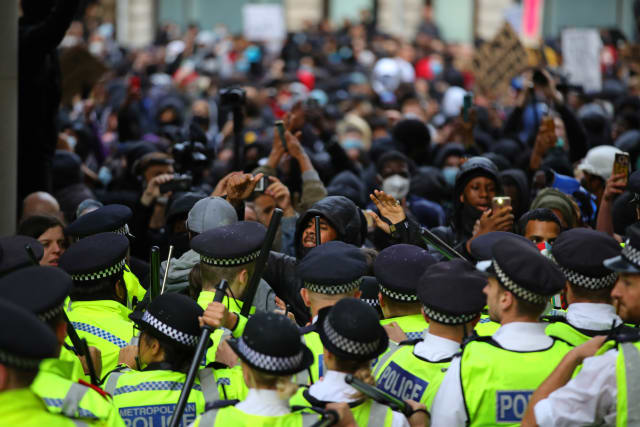 Frontline police officers have called for an apology from bosses for failing to protect almost 50 colleagues injured over the weekend in the capital’s anti-racism protests.

It comes after police without helmets and shields were pelted with bottles and fireworks in clashes with protesters in central London during demonstrations sparked by the death of George Floyd in Minneapolis.

Writing in the Evening Standard on Monday, Dame Cressida condemned the attacks, as she revealed 49 officers were injured over the weekend, including a mounted officer seen to fall from her horse on Saturday, adding to 13 hurt last week.

The force arrested more than 60 people for offences including assaulting police officers and criminal damage.

Graffiti was scrawled on the statue of Sir Winston Churchill in Parliament Square, while in Bristol protesters toppled the bronze memorial to slave trader Edward Colston and dumped it into the harbour.

On Sunday evening, Boris Johnson tweeted: “These demonstrations have been subverted by thuggery – and they are a betrayal of the cause they purport to serve.

Home Secretary Priti Patel mirrored the Prime Minister’s words ahead of a statement in the Commons on public order on Monday afternoon.

Marvin Rees, the Mayor of Bristol, said he felt no sense of loss for the statue, but told BBC Radio 4’s Today programme: “As an elected politician, obviously I cannot condone the damage and I am very concerned about the implications of a mass gathering on the possibility of a second Covid wave.”

Andy Marsh, chief constable of Avon and Somerset Police, backed his officers after criticism they did not intervene.

In a video posted to social media, he said: “To arrest suspects would likely lead to injuries to suspects, injuries to officers, and people who were not involved in damaging property being thrown into a very violent confrontation with the police that could have had serious ramifications for the city of Bristol and beyond.”

Justice minister Kit Malthouse called on Monday for those responsible to be prosecuted.

Labour leader Sir Keir Starmer said the statue should not have been torn down by protesters, but added that it was wrong for it to have remained in place for so long.

On LBC Radio, he said: “It shouldn’t be done in that way. Completely wrong to pull a statue down like that.”

Black Lives Matter demonstrations went ahead peacefully for much of Sunday afternoon in London before a number of clashes with police on Whitehall.

Mr Marsh said “enough is enough”, adding: “I shall be calling for urgent action from the Commissioner. And we would expect an official apology from senior leaders to our members for being frankly offered up like this.”

Mr Marsh, whose organisation represents some 30,000 rank-and-file officers in London, said the Met’s tactics are “very wrong” and said police should be dealing with disorder “far more robustly”.

“Our leaders have to respond and kit us up correctly and make sure we are fully prepared for what is taking place,” he said.

“If bottles and fireworks are being thrown at our police officers, we should have public order equipment on. No ifs. No buts. Our colleagues’ safety should be of paramount importance to our police leaders.”

Dame Cressida said officers are trained to use “force proportionately, lawfully and only when absolutely necessary” and condemned violence directed at officers.

“I am very proud of the work my officers are carrying out to reassure our communities and to keep the streets of our capital safe and calm,” she wrote in the Evening Standard.

“The violent criminality we saw is disgraceful and will have been frightening.

“Unfortunately some statues and iconic sites have been damaged and we will investigate and seek to identify those responsible.

“It will never be acceptable to attack police officers, damage property and leave others in fear of their safety.

“Furthermore, those attending mass gatherings risk exposing themselves and others to this deadly virus.”

Sunday’s Black Lives Matter rallies attracted thousands of people right across the UK after Mr Floyd, an African American man, died after a white police officer held him down by pressing a knee into his neck on May 25.

Pop star Lewis Capaldi was pictured alongside protesters at Holyrood Park in Edinburgh, while rapper Stormzy attended the London protest.

London Black Lives Matter also organised an online protest via Zoom for those unable to attend the demonstrations, which attracted more than 10,000 people.

Elsewhere, the operational patrol unit of Warwickshire Police tweeted that the M6 southbound was temporarily closed soon after 6pm due to pedestrian protesters blocking the carriageway at Junction

In Manchester, hundreds crowded into St Peter’s Square, kneeling in silence as a mark of respect Mr Floyd.