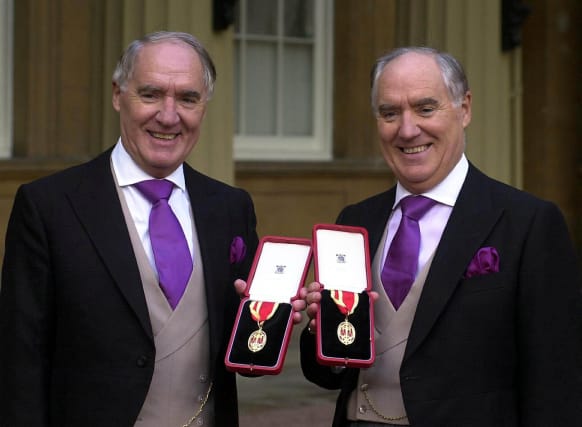 Sir Frederick Barclay’s nephews bugged the conservatory of the Ritz hotel after becoming “seriously concerned” about the billionaire property magnate “posing a significant risk of harm” to the family business, according to documents lodged with the High Court.

The 85-year-old businessman is involved in a bitter High Court battle with three of his twin brother Sir David’s sons over 94 hours of secret recordings made over a number of months as part of what his lawyers have described as “commercial espionage on a vast scale”.

Sir Frederick and his daughter Amanda are suing Alistair, Aidan and Howard Barclay, Aidan’s son Andrew, and Philip Peters – a director of a number of companies in the Barclay Group – after the “elaborate system of covert recording” was discovered in January.

Last month, Sir Frederick released footage appearing to show his nephew Alistair handling a listening device which is said to have been used to capture more than 1,000 separate conversations.

The High Court has also previously heard that the Ritz was sold for “half the market price” after conversations between Sir Frederick and a Saudi investor, who was offering £1.3 billion for the London landmark, were secretly recorded.

But Aidan and Howard Barclay hit back at that allegation in a public statement last month, accusing Sir Frederick of “consistent, misleading and damaging briefing to the media against us and our family businesses”.

On Monday, all five defendants filed their formal defence to Sir Frederick and Amanda Barclay’s claim, in which they said they thought it was “necessary and reasonable” to bug the Ritz in order to protect the Barclay Group.

All five admit that “the recordings contained private and confidential information of the claimants” and accepted that Sir Frederick and Amanda are “entitled to general damages” for breach of confidence, misuse of private information and breach of data protection laws.

Heather Rogers QC said: “The defendants will seek to agree the appropriate damages/compensation with the claimants.”

But the defendants deny that their actions caused any loss to “the claimants’ economic and/or financial interests”.

The written defence claims that Alistair Barclay “instigated” the bugging after the defendants “had become seriously concerned about certain actions and statements of Sir Frederick and Amanda Barclay and their potential impact upon the (Barclay) Group and/or upon the defendants and their interests”.

Ms Rogers said: “The defendants’ actions … were taken in the light of those concerns and the belief (held by each of them) that they were necessary and reasonable to protect the interests of the defendants, including by protecting the Group and its interests.”

The document claims that, after speaking to Sir Frederick and Amanda, Alistair was “very troubled about what seemed to him to be a remarkable change in their conduct posing a significant risk of harm to his brothers Aidan and Howard Barclay, to the Group, to their interests (that is, of his brothers and the Group) and to his own interests”.

The defence states that Alistair Barclay spoke with Andrew Barclay and then, “without consulting the other defendants and without their prior knowledge, decided to place and placed an off-the-shelf recording device” in the conservatory at the Ritz in “early November 2019”.

It added: “Alistair Barclay had no intention of causing any injury to Sir Frederick or Amanda.”

The document also alleges that, while the defendants have “sought to avoid the public eye and to discourage intrusion into their private lives and financial affairs”, the claimants had sought publicity “by the gratuitous language used and unnecessary information deployed” in previous court hearings.

The defence added that the claimants had also provided “secretly recorded footage of Alistair Barclay to the media, and in so doing they have drawn attention to what should be the private affairs of the parties”.

In a statement, a spokesman for the defendants said: “As set out clearly in our defence, we do not dispute that the recordings were made and discussed between us.

“The actions we took were the result of serious concerns about aspects of Sir Frederick’s conduct and were taken in the belief that they were necessary and reasonable to protect the Barclay Group’s business interests from potential damage.

“We have never made, and never intended to make, any of the recorded information public.

“We did not conspire to injure any business or financial interest of Sir Frederick or Amanda. That was never our intention and there was no conspiracy as alleged.

“We fail to see how Sir Frederick or Amanda can have suffered any economic loss as a result of the recordings. They have produced no details to support their claims in those respects, and we are applying to court for those claims to be struck out.

“We regret any distress caused to Sir Frederick and Amanda Barclay, but our intention has always been to act in the best interests of the entire family.”