Dentists call on Government for support as some English surgeries reopen 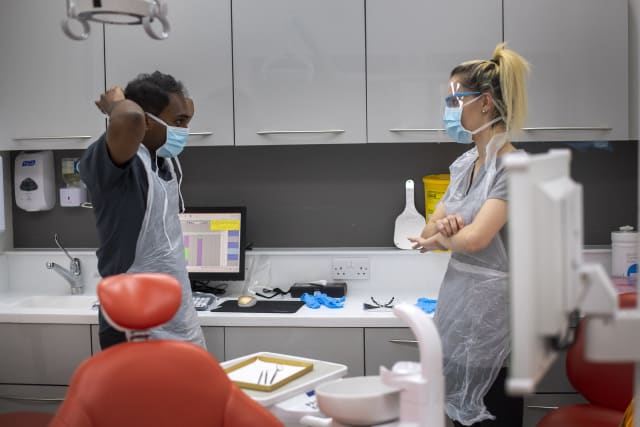 Dentists have called on the Government to support surgeries and keep treatment accessible for patients, as some practices in England reopened on Monday for the first time since lockdown rules were introduced.

In an open letter to Health Secretary Matt Hancock, the British Dental Association (BDA) said that “since lockdown, support from across Government for our members has been far too limited. That cannot continue”.

The union has asked for dentists to be granted key worker status and access to the Government supply chain on PPE, as one industry survey suggests only around one third of surgeries have opted to open today (36%).

One dentist has described the return to work as “nerve-wracking”.

Roy Woodhoo, 36, at Woodford Green Dental Care, told the PA news agency about measures that have been put in place to protect staff, but says he has been “frustrated” he has not been able to help patients for weeks.

He explained: “We’ve put screens up, barrier screens at the reception desks to protect the staff from splatter.”

Dr Woodhoo, who has also been working part-time at the urgent dental care centre in Bromley, south east London, during lockdown, added that he wished staff had been given more notice before the reopening.

“It’s good to be back, we’ve been off for over two months now and I do wish they had given us a little bit more notice in how we were coming back, but it is time that we were back,” he said.

“We’ve had patients calling up since the beginning of lockdown and it’s been frustrating in that we have not been able to help them as much as we could.”

The BDA previously warned there will be no return to “business as usual” for the industry, with patients likely to see a “skeleton service” today.

A polling of 2,053 surgeries found that more than 60% of practices estimate they will be able to treat less than a quarter of the patient numbers they saw prior to the Covid-19 pandemic.

Just one third of practices said they had enough PPE to provide face-to-face care, and only 15% reported they would be able to offer a full range of treatment.

Chair of the BDA Mick Armstrong said surgeries are “operating at a fraction of their pre-pandemic capacity” and asked the Health Secretary to “take responsibility to avert the existential crisis facing a service struggling with sky-high costs and radically reduced patient numbers”.

He added: “For years, communities from Cornwall to Cumbria struggled to get appointments but were ignored.

“Without action from this Government access problems – on an unprecedented scale – are going to be visited on millions of patients, in every part in England.”