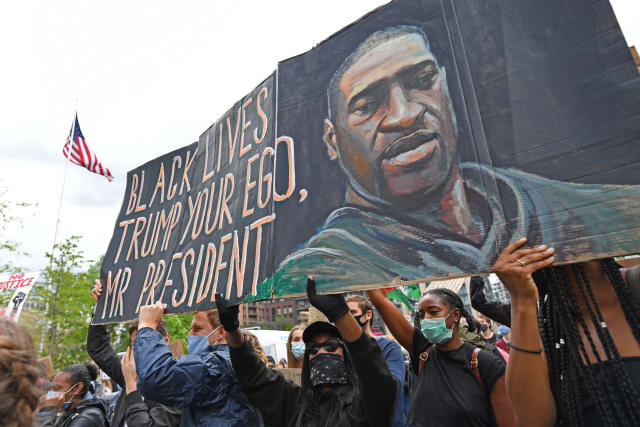 Thousands of anti-racism protesters attended rallies across the UK on Sunday, including one where a controversial statue of a slave trader was pulled down by activists.

Demonstrators flooded the streets around the US embassy in central London before marching on Westminster, protesting against racial injustice and police brutality.

Prime Minister Boris Johnson said the demonstrations had been “subverted by thuggery” following clashes between pockets of protesters and police the day before.

In Bristol, protesters toppled the bronze memorial to slave trader Edward Colston and dumped it into the harbour.

Pop superstar Lewis Capaldi was pictured alongside protesters at Holyrood Park in Edinburgh, while rapper Stormzy attended the protest in central London.

Elsewhere, the operational patrol unit of Warwickshire Police tweeted that the M6 southbound was temporarily closed shortly after 6pm due to pedestrian protesters blocking the carriageway at Junction 3.

The force said the M6 began to reopen an hour later, as demonstrators “headed into Coventry at Junction 2”.

Free masks, gloves and hand gel were being given out to the thousands of people at the US embassy in south-west London for the peaceful protests, sparked by the death of George Floyd in Minneapolis.

South London painter and decorator Christopher Green, dressed as comic book hero Black Panther, told the PA news agency he joined the protest to “support all the people in America and all those who are being oppressed”.

The 53-year-old added: “The most important thing that people have got to do is take out their video phone and document any counter-action with police because without this simple thing with George Floyd, we would probably never have known what happened.”

Graffiti was scrawled on the statue of former prime minister Sir Winston Churchill in Parliament Square, with spray paint used so the name plate read Churchill “is a racist”.

Demonstrations were carried out peacefully for much of the afternoon, but bottles were thrown at officers who caught someone trying to pull a flag on the Cenotaph shortly before 9pm.

The crowd – much smaller than earlier on Sunday – shouted “no justice, no peace” as they moved down Whitehall and let off smoke bombs as a police helicopter buzzed overhead.

On Sunday evening, Mr Johnson tweeted: “People have a right to protest peacefully & while observing social distancing but they have no right to attack the police.

“These demonstrations have been subverted by thuggery – and they are a betrayal of the cause they purport to serve.

Meanwhile, London Black Lives Matter organised an online protest via Zoom for those who are unable to attend demonstrations in person, which attracted more than 10,000 people.

Avon and Somerset Police has launched an investigation and is seeking to identify those involved with the removal of the statue.

“I think that is utterly disgraceful and that speaks to the acts of public disorder that actually have now become a distraction from the cause in which people are actually protesting about and trying to empathise and sympathise with,” she said.

In Manchester, hundreds crowded into St Peter’s Square, kneeling in silence as a mark of respect for Mr Floyd, who died after a white police officer held him down by pressing a knee into his neck on May 25.

Health Secretary Matt Hancock said it is “undoubtedly a risk” that there will be an increase in Covid-19 cases following the protests, as he urged people not to gather in groups of more than six people.

Mr Hancock said he supported the activists’ arguments, but said: “Please don’t gather in groups of more than six people because there is also a pandemic that we must address and control.”

It is the second day in a row of action on the streets of cities across the UK, including London.