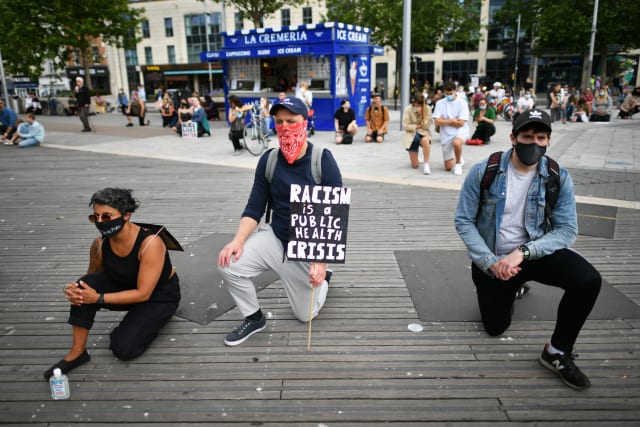 Thousands of protesters have joined an anti-racism rally outside the US embassy in London as Black Lives Matter demonstrations take place in cities across the UK.

Crowds of demonstrators wore face coverings and held placards outside the embassy in Battersea, south-west London, on Sunday, in protest against police brutality following the death of George Floyd in Minneapolis.

The Metropolitan Police warned drivers of disruption on Nine Elms Lane, while video footage showed protesters flooding the roads outside the embassy.

Meanwhile, London Black Lives Matter organised an online protest via Zoom for those who are unable to attend demonstrations in person.

In Bristol, thousands marched through the city centre after a crowd of at least 5,000 packed into the College Green area to hear from speakers and hold an eight-minute silence.

Many protesters wore masks and gloves, but the majority were unable to adhere to the two-metre social distancing guidance and were pressed against one another in the city’s narrow streets.

Elsewhere, hundreds of people crowded into Manchester’s St Peter’s Square, kneeling in silence as a mark of respect for Mr Floyd, who died after a white police officer held him down by pressing a knee into his neck on May 25.

Following speeches, protesters are expected to march through the city centre for a second day of demonstrating in Manchester.

Health Secretary Matt Hancock said it is “undoubtedly a risk” that there will be an increase in Covid-19 cases following the protests, as he urged people not to gather in groups of more than six people.

Mr Hancock said he supported the activists’ arguments, but said: “Please don’t gather in groups of more than six people because there is also a pandemic that we must address and control.

Protesters also took to the streets on Saturday for events held in London, Manchester, Cardiff, Sheffield and Newcastle, among other cities.

Demonstrations in central London were carried out peacefully for much of the afternoon, but disturbances began breaking out at around 6pm outside Downing Street.

Metropolitan Police Commissioner Dame Cressida Dick said 14 officers were injured during clashes with a minority of protesters, while 14 people were arrested.