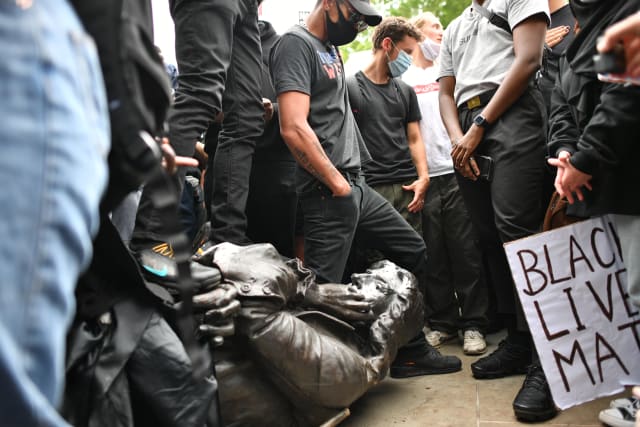 Protesters in Bristol have pulled down the controversial statue of a 17th Century slave trader.

The bronze memorial to Edward Colston situated in Bristol city centre since 1895, was torn down after crowds left College Green.

It had been the subject of an 11,000-strong petition to have it removed.

Images showed crowds rushing to stamp on the statue, which stood in Colston Avenue, before it was rolled along the road and pushed into the harbour.

Earlier, protester John McAllister, 71, tore down black bin bags used to hide the statue to denounce it in front of fellow protesters.

He told the PA news agency: “It says ‘erected by the citizens of Bristol, as a memorial to one of the most virtuous and wise sons of this city’.

“The man was a slave trader. He was generous to Bristol but it was off the back of slavery and it’s absolutely despicable. It’s an insult to the people of Bristol.”

According to Historic England, the statue was sculpted by John Cassidy, of Manchester, with an inscription that read “erected by citizens of Bristol as a memorial of one of the most virtuous and wise sons of their city AD 1895”.

Colston’s involvement in the slave trade through the British-based Royal African Company was the source of much of the money which he bestowed in Bristol, the website added.