Lisa Nandy: You cannot be silent in face of racism and police brutality 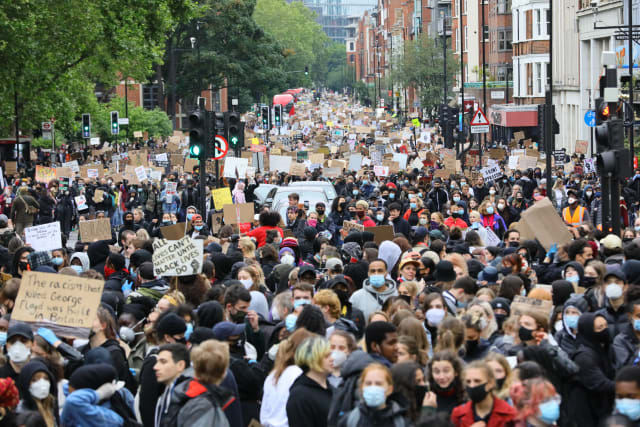 Lisa Nandy has said that people “cannot be silent in the face of racism and police brutality” as she backed those who are speaking out.

Following mass anti-racism protests across the UK on Saturday, the shadow foreign secretary said that tackling the issue requires taking an active stance.

Ms Nandy said that she is “proud” of the young people demanding change, while urging them to take precautions when they take part in protests during the coronavirus pandemic.

She told the BBC’s Andrew Marr programme: “I think it’s one of the most important things about living in a free society is that people can go out and protest.

“I’ve said repeatedly that it must be safe, people should social distance – please take precautions – but I’m very proud of those young people who are coming out and speaking up.

“Now I’m someone who has lived with racism in my life, I’ve seen it with my family, I’ve seen it in our country and I think it requires you to take an active stance against it.

“You cannot be silent in the face of racism and police brutality, and I think those young people are right to raise their voices and to demand change.”

Ms Nandy also appealed to the small number of people who have used violence at the Black Lives Matter protests to stop.

“And more than that, as well as it just being completely wrong to attack police officers who are trying to keep the peace, many of whom are deeply sympathetic with the sentiment behind these protests, who are struggling as well to deal with Covid and help to keep public order in a really unprecedented situation, it also has the effect of dampening the voices of those who are calling for change.

“Because the newspapers this morning, the headlines were dominated by the fact that there was violence, a small number using violence at the London protest.

“And actually across this country and across the world, you’ve got people coming out in the tens of thousands to protest peacefully and to raise their voices for change, and they’re the voices that I want to hear.”

The Labour MP for Wigan also said the UK Government cannot remain silent on police brutality in the United States.

“I actually think this is a deliberate election strategy,” she said of the actions being taken by US President Donald Trump.

“Now I’ve no idea whether Donald Trump is a racist or not a racist, what I do know is that in the run-up to the American elections, this is one of the ways that politicians try to activate their base.

“They divide people in order to try to advance their own cause and that’s actually one of the things that is so damaging about it.

“That’s crept into our politics in Britain in the last few years and we’re seeing under the cover of Covid, other countries trying to do something similar – rowing back on people’s freedoms, human rights, the rule of law, democracy.

“And that’s one of the reasons why I’ve said this Government cannot remain silent in the face of that.”