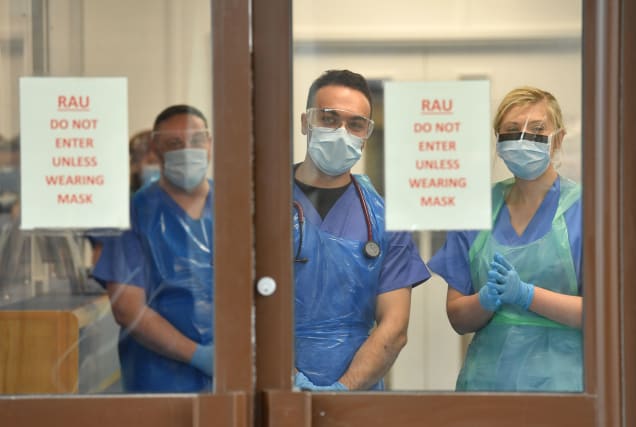 NHS trusts were not consulted on plans for all hospital staff to wear surgical face masks and visitors and outpatients to wear face coverings from June 15, a healthcare chief has claimed.

Chris Hopson, chief executive of NHS Providers, criticised the Government for appearing to make decisions “on the hoof” that seem “overly influenced by politics”.

He said the Government wanted to ensure that “even as the virus comes under control”, hospitals are a place of “care and of safety”.

Mr Hopson told BBC Radio 4’s Today programme: “Two major changes on the use of personal protection equipment and on visiting policy were announced late yesterday afternoon at the end of what, to be frank, was a very busy, difficult and hard week for our trust leaders, with absolutely no notice or consultation.

“I think it’s the latest in a long line of announcements that have had a major impact on the way the NHS operates in which those frontline organisations feel they have been left completely in the dark and they are then expected to make significant and complex operational changes either immediately or with very little notice.”

He said political leaders “need to understand that running these organisations is a complex and difficult task and what you can’t do is turn on a sixpence” with major policy announcements.

Mr Hopson’s criticism was echoed by the British Medical Association, which warned there was “little detail” on how the policy would be implemented, where the masks would come from or how outpatients and visitors would be given them.

Consultants committee chair Dr Rob Harwood said: “Given the lack of PPE supplies throughout the Covid-19 pandemic, it is absolutely crucial that the Government ensures there are enough supplies of face masks for staff, and adequate provision of face coverings for outpatients and the public by the 15th June.”

It comes amid reports that Sunday trading laws could be suspended for a year under Government plans to stimulate the economy.

Downing Street is said to be drawing up legislation to enable larger supermarkets to open for more than six hours on Sundays, according to The Times.

The paper also said cafes and pubs would be given fast-track approval to serve food and drink outside, doing away with the need for the 28-day minimum statutory consultation period.

– Newly-updated World Health Organisation advice said governments should encourage the public to wear face coverings where social distancing is difficult, such as on public transport and shops.

– The Health Secretary urged people not to take part in mass demonstrations this weekend following anti-racism protests in the wake of the death of George Floyd.

– Age UK said care home residents are being asked to pay a “coronavirus bill” of more than £100 a week on top of existing fees to help social care providers stay afloat.

– PA analysis indicated that black, Asian and minority ethnic (BAME) staff accounted for 60% of frontline health workers whose deaths have been linked to Covid-19.

Meanwhile, there are fears over the coronavirus reproduction rate in parts of England as new data suggested the R value is now around one in the North West.

The value used by the Government remained between 0.7 and 0.9 for the UK as a whole, though the figure has a two to three-week lag, meaning it does not account for the latest easing of the lockdown.

But a separate report from Public Health England (PHE) and Cambridge University, which estimates what the value is currently, put the North West on 1.01 and the South West on 1.00.

He said the Scientific Advisory Group on Emergencies (Sage) believes the R is below one across the UK but the Government wants to “increasingly have an approach in tackling local lockdowns where we spot a flare-up”.

Labour-led Tameside Metropolitan Borough Council in Greater Manchester has advised schools to delay their wider reopening until at least June 22 because of the infection rate.

The council’s director of public health, Dr Jeanelle de Gruchy, wrote to headteachers strongly advising them against admitting more pupils until there is further assurance that the “rate of infection is reducing and R is firmly below 1”.