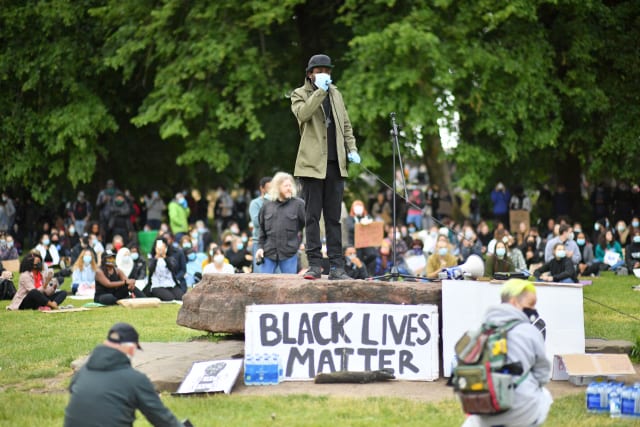 Around 2,000 people joined in a Black Lives Matter demonstration in Cardiff on Saturday over the death of American George Floyd.

Crowds generally kept to two-metre social distancing and many wore face coverings and gloves, while only a small police presence watched over the peaceful protest.

Tensions only appeared when a local councillor, Ali Ahmed, was forced off a podium by angry organisers and booed by the crowd after declaring “All lives matter”, a slogan seen to many as a criticism of the Black Lives Matter movement.

Other demonstrations were held in Bangor and Caerphilly, while one in Newport is scheduled for Thursday.

Andrew Ogun, 22, who took to the podium to speak about racial inequality in South Wales, said Mr Floyd’s death after being detained by police in Minneapolis had “struck a match” for people in Wales.

He told the PA news agency: “A lot of people are here today and it’s amazing to see.

“This killing struck a match for everybody. Not just black people. People are frustrated, people are tired, people want to get their voices heard.

“We can’t be disingenuous and say police brutality is as bad here as the USA. But regardless, the implicit bias against black people needs to change.

“Because I’m 10 times more likely to be stopped by police. I’ve been stopped for no valid reason when I’m doing good things, doing artistic things, because of how I looked.”

He added: “The main thing that needs to be pushed is a change in curriculum. We need to have a very clear awareness of the role that the UK played in black history, and the role black people played in UK history, which has been completely undermined with it hiding away from its colonial past.

Fellow speaker Gabin Kongolo, said: “It fills my heart with joy to know so many people actually care to come down. We know there’s a virus going on, but there’s a bigger virus which is racism.

“We don’t want to be killed in the street, cold blooded, just because of the way we were born. We want better for our people, and equal rights, equal opportunities.”