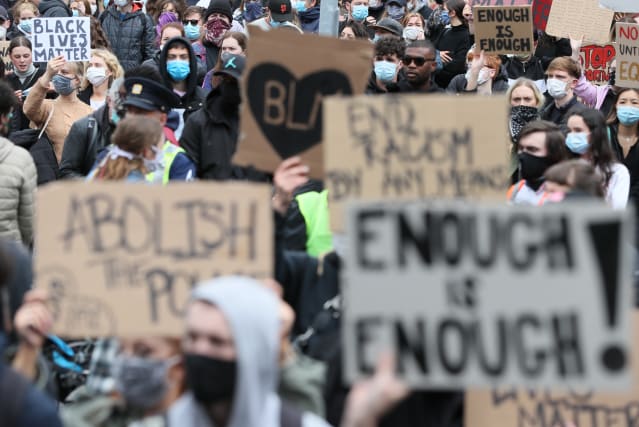 Some of the biggest crowds at rallies on the island gathered at Custom House Square in Belfast and outside the US Embassy in Dublin.

In Northern Ireland, Assistant Chief Constable Alan Todd had urged organisers to call off the rallies sparked by the death of George Floyd in police custody in the US.

The PSNI conducted checks on roads and at transport hubs ahead of the protests.

As people arrived, many wearing face coverings and gloves, at the demonstration in Belfast they were handed flyers by police officers detailing social-distancing rules. Some were issued with community resolution notices.

Organisers had marked out social-distancing measurements and encouraged those attending to space out.

They heard speeches and at one stage knelt on one knee in solidarity.

In Dublin, there were also calls for social distancing to be observed as crowds protested outside the US Embassy.

Marks were made on the road to show people how far apart to stand.

However, protesters appeared closer together as more numbers arrived, many holding placards which carried messages of support for the Black Lives Matter campaign.