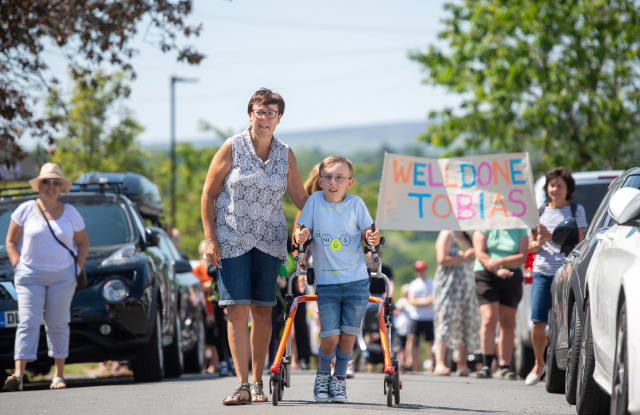 A nine-year-old with cerebral palsy has raised more than £100,000 by completing a lockdown marathon and a llama joined a Black Lives Matter protest in Friday’s news.

A nine-year-old boy with cerebral palsy who has raised more than £100,000 by using his walker to complete a lockdown marathon has been congratulated by his inspiration, Captain Sir Tom Moore.

On Sunday, Tobias Weller completed the final 750 metres of his 70-day challenge to walk the full marathon distance on his Sheffield street to the cheers of dozens of his friends and neighbours.

The youngster – who has been dubbed Captain Tobias by his supporters after the 100-year-old national hero – originally aimed to raise £500 for Sheffield Children’s Hospital and his special school in the city.

But what Tobias calls his “ginormous challenge” passed the £100,000 mark on Thursday evening.

An NHS nurse put his hand on his heart in thanks to colleagues as he finally left hospital after a seven-week battle with Covid-19.

Orlando Fulgencio was wheeled out to huge cheers and applause from staff who lined the corridors to celebrate his “remarkable recovery”.

The frailty unit nurse raised his arms in appreciation as dozens of medical workers turned out to wish him well in his continued recuperation.

A fundraiser inspired by Black Lives Matter protests across the world aims to put diverse books into Britain’s primary schools.

The fund, which has raised over £6,000 since it was created on Wednesday, aims to help black, Asian and minority ethnic (BAME) students to feel represented by their school libraries.

“There’s a lack of books in primary schools where not only can teachers teach the white students about these issues, but also the BAME students are severely under-represented in the books that they have,” Scott Emmons, who created the fund, told the PA news agency.

A llama spotted at a Black Lives Matter (BLM) protest has been hailed as a “morale booster” by those taking part.

As protests take place in the US and worldwide after the death of George Floyd in police custody, a group in Portland, Oregon on Tuesday was joined by a llama.

Caitlin Reasor, a protester at the march, told the PA news agency: “Everyone seemed really happy to have him there, even those who were confused by his presence… he was definitely a good morale booster.”

The llama, named Caesar the “no drama llama”, works as a therapy llama, and has visited schools and blood donation events in the past.