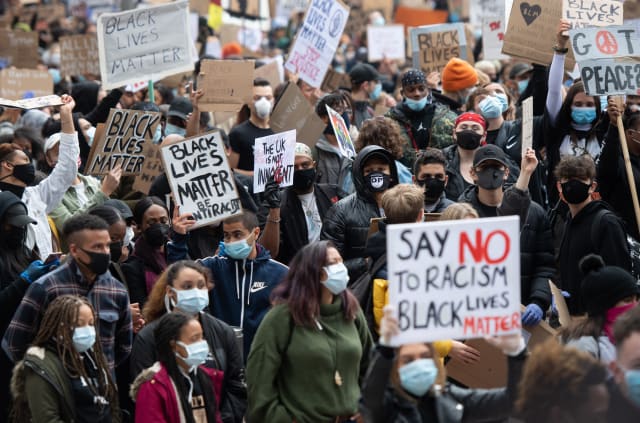 Future mass protests over the death of George Floyd at the hands of police in the US would be “unlawful” due to the current coronavirus restrictions, a senior Metropolitan Police officer has warned.

“The Government said that for health reasons people should not be meeting in groups of six, so we would strongly encourage people not to come out and gather in these large numbers because they are putting themselves and others at risk.

“And if they do come out, then we would ask them to observe that social distancing, think about those around them.”

Crowds have gathered in London and Birmingham this week to protest over the death of Mr Floyd, 46, after a white officer held him down by pressing a knee into his neck in Minneapolis on May 25.

It sparked days of protest in the US and Black Lives Matter (BLM) demonstrations across the world.

Michael Lockwood, director general of the Independent Office for Police Conduct (IOPC), which oversees complaints made against forces in England and Wales, has urged officers to listen to ethnic minority communities.

Writing in The Independent, he said: “Right now, communities in the UK are expressing real and growing concerns about disproportionality.

“Only two weeks ago we highlighted increasing community concerns about the use of Taser.

“We are also hearing concerns about stop and search and, most recently, fines issued during lockdown being disproportionate to black people.

“There must be more research to understand issues of disproportionality, as well as assurance and scrutiny around tactics like use of force and stop and search.”

Protesters in Birmingham on Thursday “made their voices clearly heard”, police said, but there were no arrests and no disorder.

Crowds gathered in the city’s Centenary Square, where a silence was observed in memory of Mr Floyd.

Demonstrators, many wearing protective face masks, had been due to congregate in nearby Victoria Square but moved to the larger area to aid social distancing.

Several hundred people then headed to an area outside West Midlands Police’s Lloyd House HQ, where many of them knelt or sat in the road with their fists raised.

The protest came after pockets of protesters clashed with police as thousands of people flooded into central London and abandoned social distancing for a BLM demonstration on Wednesday.

Demonstrations across the US have included clashes between police and protesters, with officers recorded firing tear gas and rubber bullets on crowds.

At a memorial to Mr Floyd in Minneapolis on Thursday night, US civil rights leader the Rev Al Sharpton said he was more “hopeful today than ever” about the fight against racism after seeing marches in London and Germany.

Citing the Bible, he said: “I’m more hopeful today than ever. Why? Well let me go back. Reverend Jackson always taught me stay on your text, go back to your text Ecclesiastes – there is a time and a season.

“And when I looked this time, and saw marches where in some cases young whites outnumbered the blacks marching, I know that it’s a different time and a different season.

The memorial at the Frank J Lindquist sanctuary at North Central University was the first service to be held in the next six days across three communities where Mr Floyd was born, grew up and died, and was attended by celebrities, civil rights activists and politicians.

Mr Floyd’s body is to go to Raeford, North Carolina, where he was born, for a two-hour public viewing and private service for the family on Saturday.

A public viewing will be held on Monday in Houston, where he lived most of his life.

Prime Minister Boris Johnson said he was “appalled and sickened” to see what happened to Mr Floyd, while chief constables from across the UK issued a joint statement saying they “stand alongside all those across the globe who are appalled and horrified”.

An online-only rally is due to take place this Sunday, campaign group Stand Up to Racism said, with speakers to discuss “how we turn the new wave of anger over racism and injustice into an effective movement for change”.