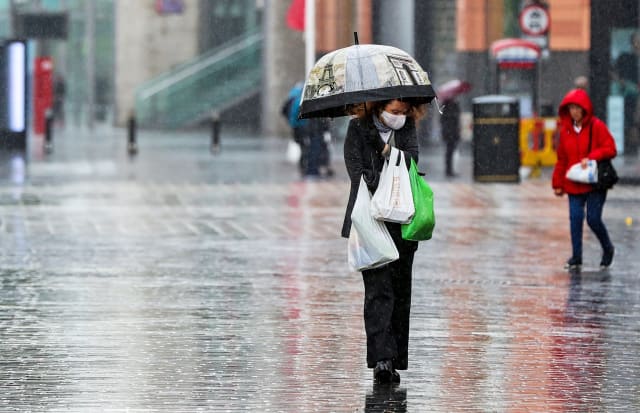 The UK will be hit with heavy showers, strong gales and colder temperatures over the weekend as Britons are warned not to move gatherings indoors.

An “unseasonably deep” low-pressure system will move south from Scandinavia bringing with it rain, thunderstorms and heavy winds across the country, according to the Met Office.

It comes after Prime Minister Boris Johnson urged the public not to move gatherings indoors if it rains, as the weather turned wetter on Wednesday – a stark contrast to last month’s clear skies and sizzling temperatures.

Over the past month, sunseekers have basked in highs of 29C (84.2F) as the nation recorded its sunniest spring since records began in 1929.

On Friday evening, rain and strong winds will move south across Scotland into Northern Ireland and northern England – and the temperature in these regions is expected to be chilly.

Met Office forecaster John Griffiths said: “The weekend will begin wet for many, with the heaviest showers over northern and east England by lunchtime.

“London and the south east will also see dark clouds and torrential downpours in the afternoon, while parts Wales will be rainy for most of the day.

“There is a possibility of thunderstorms on the east coast of England by the early afternoon with strong gales hitting the area.”

The rain will then become lighter and more sporadic in northern and central parts of England by the late afternoon on Saturday.

Mr Griffiths added: “Heavy rainfall will continue moving southward on Sunday, but the day will become drier and brighter in the North West as the day moves on. The South East will be the wettest region by the afternoon.

“Overall it will be the warmer day of the two and showers will begin to fade away by the evening for most.

“This is because of an unseasonably deep low pressure system in the North Sea moving in from the Scandinavian countries.”