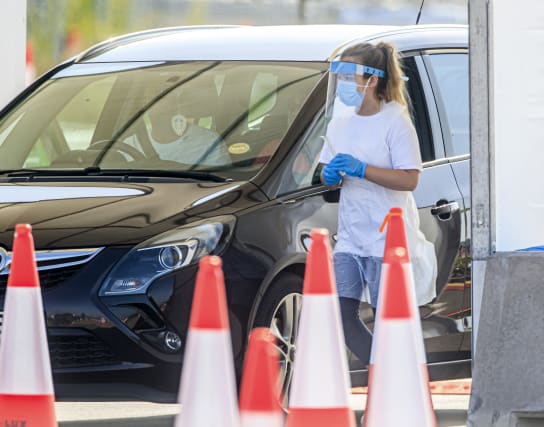 The Government has defended its test and trace strategy for Covid-19 after one of the programme’s senior executives said it will not be “world class” until at least September.

Tony Prestedge, the test and trace scheme’s chief operating officer, admitted in a webinar that the programme would not be world-beating until September or October, the Guardian reported.

But Transport Secretary Grant Shapps said on Friday that Mr Prestedge was talking specifically about the app, which is not now due to be rolled out until the end of the month.

Mr Shapps told BBC Radio 4’s Today programme: “What he said was, as with any app, it gets released and anyone who downloads an app on their phone knows it is forever being updated and bugs squashed and all the rest of it – apps are never complete in that sense.

“But the NHS test and trace system, let’s just be clear about what is there now, anybody who feels ill – you don’t have to be in a particular category, you don’t have to be a key worker – with coronavirus symptoms can now go to Gov.uk or the NHS website and book a test, it is that straightforward.

“And because the capacity is there with tests in very large numbers – in fact, probably some of the largest numbers in the world now – that is freely available.”

Mr Shapps said there were 25,000 contact tracers “who are right now making thousands of calls”.

The Government has so far declined to give details of how many people have been traced under the scheme, but Mr Shapps said he hoped this could be published in the coming days as the Department of Health cleared the numbers with the UK Statistics Authority.

In the video seen by the Guardian from May 27 – the day before the programme launched in England – Mr Prestedge is said to have told staff that the regime would operate at a world-class level “towards the September or October time”.

Prime Minister Boris Johnson told MPs on May 20 the test and trace operation would be “world-beating” and in place by June 1.

In a webinar, Mr Prestedge is said to have told staff: “I am sure when Dido (Harding) announces this service later she will make clear that it is an imperfect service at launch that we will improve over time and make it world-class by the time that we are moving towards the September or October time.”

It comes as a leaked email from the chief executive of Serco – one of the main firms contracted to deliver the service – said he wanted it to “cement the position of the private sector” in the NHS supply chain.

Serco is among several firms that are recruiting, coaching and managing contact tracers.

In an email forwarded to staff, Rupert Soames, Serco’s chief executive, said: “There are a few, a noisy few, who would like to see us fail because we are private companies delivering a public service. I very much doubt that this is going to evolve smoothly, so they will have plenty of opportunity to say I told you so.

“If it succeeds… it will go a long way in cementing the position of the private-sector companies in the public-sector supply chain. Some of the naysayers recognise this, which is why they will take every opportunity to undermine us.”

He asked managers to ensure staffed behaved in a way to survive the “Daily Mail test… that you would not mind their behaviour being described on the front of a national newspaper”.

He said it was “inevitable that someone somewhere is going to behave badly” and he wanted to know immediately to resolve the issue.

He said: “At Serco we have a fair amount of experience managing difficult issues and one of the hard lessons we have learned is that the truth we can manage – it’s the evasion or cover-up that destroys you.”

NHS England’s test and trace system, which is being led by Baroness Dido Harding, is one of the key measures introduced to help the return to something approaching normality.

It relies on identifying people who have been in contact with a positive case and getting them to self-isolate.

On Thursday, business minister Nadhim Zahawi told Question Time the app should be in place by the end of the month.

A Department of Health and Social Care spokesman said: “The new NHS Test and Trace service is up and running and is helping save lives.

“Anyone in this country can now book a test and the majority who book a test get the results back within a day.

“We have over 25,000 contact tracers in place, who have all been trained and are fully supported in their work by public health experts.”