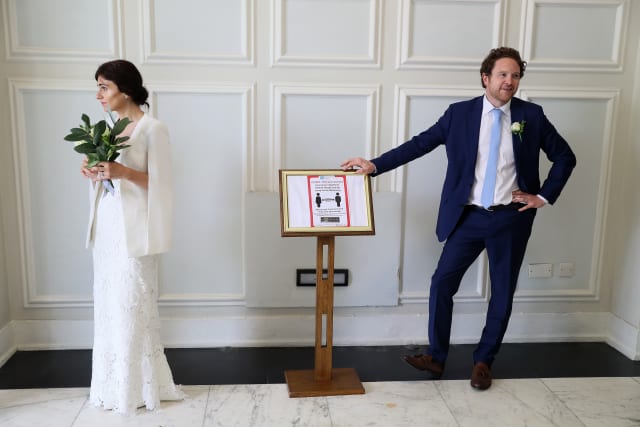 A Co Down man has tied the knot with his Argentinian-born fiancee in one of the first weddings to take place in Northern Ireland since the start of lockdown.

Michael McCaw, 36, from Holywood, Co Down married Lucrecia Landeta Garcia, also 36, on the steps of the east wing of City Hall with just six people present.

The couple were congratulated with clapping and cheers from their best man and bridesmaid instead of hugs as social distancing was observed.

Mr McCaw, a magazine editor, proposed to his girlfriend, who works as a banker, last Christmas Eve.

They had been due to wed on Sunday with guests set to fly in from across the world.

But instead, they became the second couple to wed at Belfast City Hall since lockdown with just six people present.

“We were due to have 130 at our wedding, maybe 70% from Argentina, quite a lot of people from London where I used to live and we have family in France,” he told the PA news agency.

“We’re at the age where we have a lot of friends getting married, many of them have pushed their dates to later in the year or next year, but with the uncertainty we just wanted to crack on.”

His new wife added: “It’s just what we can have now.”

He agreed: “It was a matter of just doing what we could. This has been, so far, a really enjoyable day, but also for me, thinking about this this morning – compared against a different wedding – I’ve never had a wedding before, so for me this feels good.”

Mr McCaw said his grandmother died a few weeks ago in the Covid wing of Antrim Area Hospital, and said he thinks she would have appreciated their wedding going ahead.

The couple are set to have a blessing on Sunday when many who had been due to attend their wedding will join them virtually.

“So this wedding part one, wedding part two is on Sunday as per the original date. We’ve got everyone dialling in from Argentina, Australia, Japan, France, England via Zoom,” he said.