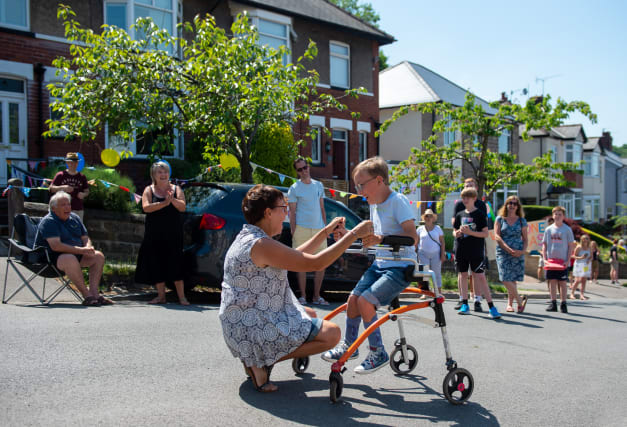 A nine-year-old boy with cerebral palsy who has raised more than £100,000 by using his walker to complete a lockdown marathon has been congratulated by his inspiration, Captain Sir Tom Moore.

On Sunday, Tobias Weller completed the final 750 metres of his 70-day challenge to walk the full marathon distance on his Sheffield street to the cheers of dozens of his friends and neighbours.

The youngster – who has been dubbed Captain Tobias by his supporters after the 100-year-old national hero – originally aimed to raise £500 for Sheffield Children’s Hospital and his special school in the city.

But what Tobias calls his “ginormous challenge” passed the £100,000 mark on Thursday evening.

On Friday, he received a special message from Sir Tom, through his daughter Hannah Ingram-Moore.

“What an achievement. We are so, so proud of you. Have a lovely day.”

Tobias replied on his Twitter feed: “I got a message from Sir Captain Tom Moore!!! Boom!!!!! I salute you, Captain!”

His mum, Ruth Garbutt, posted a video on social media of her waking Tobias on Friday morning with the news about the £100,000 milestone.

A sleepy Tobias said it was “magnificent” and that he was “chuffed to bits”.

The youngster, who also has autism, has been cheered every day of the lockdown by his neighbours as he walked 750m towards his target of the full 26.2 mile marathon distance.

On Sunday, scores of socially distanced supporters cheered him on as he broke the tape to complete his challenge.

Since then, he has continued walking and appeared on media around the world.

David Vernon-Edwards, director of The Children’s Hospital Charity, said: “Captain Tobias’ remarkable determination and effort in completing his lockdown marathon has touched the hearts and inspired people not only in Sheffield, but across the country and around the world.

“We’re very proud of him and all the staff at Sheffield Children’s, whose excellent care helps children like Tobias to pursue their dreams every day.”

Julie Booth, head of fundraising for Paces Sheffield, said: “We are so incredibly proud of Captain Tobias.

“His strength and determination to complete a marathon is an inspiration to us all. Paces’ share of the funds will be used towards our recently launched capital appeal to raise £3.5 million to build a new school and centre which will allow us to support up to three times as many children and adults.

“We are delighted that Tobias has chosen to support our charity with this and we simply can’t thank him enough!”

Donations can be made at www.justgiving.com/crowdfunding/ruth-garbutt-3