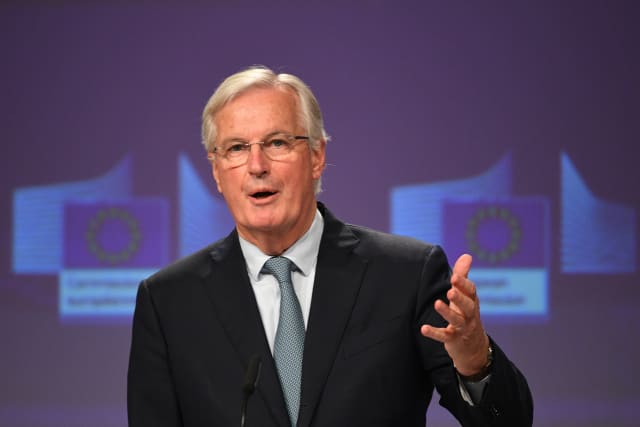 Britain and the EU are to continue talks on a post-Brexit trade deal despite the latest round of negotiations failing to break the deadlock.

Following four days of discussions by video link, the EU’s chief negotiator Michel Barnier said there had been “no significant areas of progress”.

His UK counterpart David Frost said they would have to “intensify and accelerate” the process if there was to be any chance of an agreement.

The talks had been intended to lay the ground for a high-level summit later this month to take stock of progress.

However both sides suggested the unwieldy system of remote meetings – agreed because of the coronavirus outbreak – had reached its limit and that officials would need to start meeting again face to face if they were to move forward.

Speaking at a press conference in Brussels, Mr Barnier said he hoped arrangements could be in place by the end of the month.

“I think it will work better, it’ll be more effective and easier,” he said.

British officials said they remained confident the high-level meeting would still go ahead although a date has yet to be agreed.

British officials had previously indicated they regarded June as an “inflection point” in the talks, but a senior member of the negotiating team acknowledged the coronavirus outbreak meant there would be some delay.

However he insisted the talks could not be allowed to drag on into the autumn without clear evidence that a deal was possible.

“We are not up for a long negotiation over the next months well into the autumn where nobody knows what is going to happen. October is too late for us to conclude this,” the official said.

“We need to work intensively now and into July to see if we can find the high-level trade-offs that unlock a deal within all our important negotiating parameters.”

As it stands, Britain will leave the EU single market when the current Brexit transition period comes to an end at the end of the year with nothing to replace it unless a deal is agreed.

Mr Barnier said the “door is still open” for the UK to seek an extension to the transition period to allow more time for negotiations to continue – something which Mr Johnson has repeatedly ruled out.

However the EU negotiator again accused the British side of backtracking on commitments made in the political declaration signed last year by the Prime Minister – including on continued access to UK fisheries.

“We cannot and will not accept this backtracking on the political declaration,” he said.

British officials acknowledged that they had a “slightly different interpretation” of the declaration, which they said was meant to set the “parameters” for the negotiations.

“It doesn’t require everything in it to be agreed in treaty form,” said one.

Meanwhile business leaders in the UK expressed concern at the “worryingly slow” progress in the negotiations.

CBI deputy director general Josh Hardie said an ambitious deal with the EU would be a “cornerstone” of the economic recovery following the pandemic.

Most businesses were unprepared for a “dramatic” change in Britain’s trading relationship with its biggest partner in just six months and he called on political leaders to “change the dynamic” of the negotiations.

“Failure to break the deadlock only leaves a choice between an extension that the UK Government has already ruled out or worse, a deeply damaging no deal,” he said.