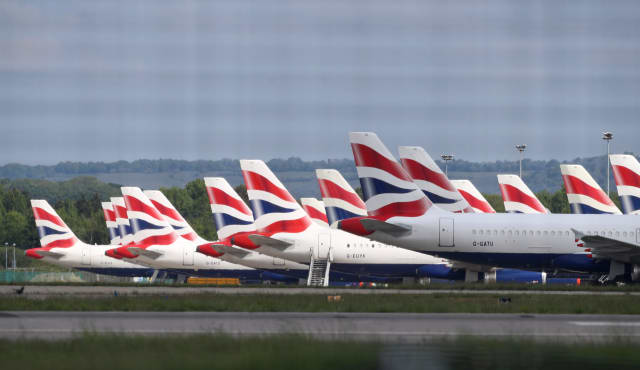 A union boss has criticised British Airways after the company did not join a meeting between the Home Secretary and the travel industry to discuss the UK’s coronavirus quarantine plans.

Unite general secretary Len McCluskey said the airline’s workers, passengers and shareholders deserved to know why the airline’s management did not attend the roundtable meeting with Priti Patel on Thursday.

He said: “The Government has opened the door and the entire UK aviation industry is meeting – airline carriers and airports – in an effort to find a way through this crisis.

“It is unbelievable and, frankly irresponsible, that BA would sit this out.

“Thousands of airline and airport jobs across this country are currently hanging by a thread, yet BA spurns the opportunity to work with industry and Government to pull together at this time of huge upheaval.”

It is understood that the Home Office received no reply from British Airways (BA) after being invited to the meeting, which was attended by several of its airline competitors, including Virgin Atlantic, easyJet and Jet2.

A Whitehall source said it was a “shame” that one of the country’s largest airlines had turned down the opportunity for “face time” with a Cabinet minister and to work with the Government.

A spokeswoman for the airline confirmed neither BA nor its owner International Airlines Group (IAG) were at the meeting.

In April, BA announced it planned to reduce its workforce by more than a quarter as it does not expect demand for air travel to return to 2019 levels before 2023.

It had already furloughed around 23,000 staff under the Government’s Job Retention Scheme, which pays 80% of wages up to £2,500 a month.

On Wednesday, MPs and Unite called for BA to lose some of its Heathrow slots due to cutting jobs while receiving tens of million of pounds of taxpayers’ money.

Ms Tolhurst said the Government would be “looking at” ensuring the slots allocation process “encourages competition”.

She said the furlough scheme “was not designed for taxpayers to fund the wages of employees, only for those companies to put the same staff on notice of redundancy during the furlough period”.

In an internal letter to staff, BA chief executive Alex Cruz stated that “every slot lost will lead to jobs in BA being permanently lost” and he insisted he wanted to “save as many jobs as possible”.

Mr McCluskey said on Thursday: “This is a company that claims to be in crisis, a crisis that requires them to sack their entire workforce of 42,000, yet they will not attend a meeting where help could have been offered.”

He described the airline’s conduct as “extraordinary”, adding: “This betrayal will not be forgotten or forgiven by the British public”.

“BA has to come to their senses and get round the table with ministers and Unite to stop this destruction of not just our national carrier but the ruin BA’s actions will bring to this sector as a whole,” he said.

Union criticism of BA comes as ministers continue to face pressure over the planned blanket 14-day quarantine for travellers to the UK due to come into force from June 8.

Ryanair boss Michael O’Leary has said the plans would “do untold damage to British tourism”.

IAG chief executive Willie Walsh has also criticised the quarantine plan, and said plans to help the airline industry recover have been “seriously set back” by politicians making negative comments about Britons travelling abroad this year.

He has also accused unions of trying to “intimidate” BA and delay redundancy consultations.