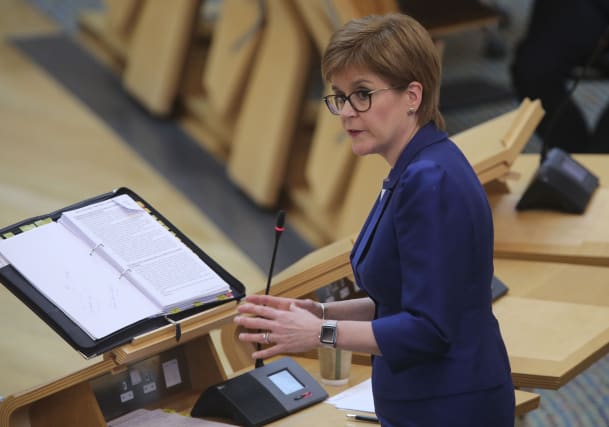 Nicola Sturgeon has said she did not visit her family in the first weekend of easing lockdown restrictions in Scotland.

The Scottish First Minister stated a number of reasons for her decision, including not wanting to add to the numbers out on the road who would also be making similar journeys.

In a special Covid-19 interview airing across the Hits Radio Network on Friday morning, Ms Sturgeon jokingly hoped her mother would be able to hear the reasons behind not visiting.

She told Ewen Cameron that as well as catching up on work, she had decided to keep the peace as the current lockdown measures only permit visiting one household a day.

The First Minister said: "Firstly, I had a lot of work on at the weekend. Things are pretty busy just now and weekends I try to catch up with a lot of paperwork and reading that I don't get to do during the week.

"Secondly, I knew there would be ... not people breaching the guidelines but people perfectly legitimately, I knew there'd be more people out and about on the roads and I just took a personal decision not to add to that.

"But thirdly, my mum and dad and my sister and my niece and nephew live quite close to each other.

"And because you're only allowed to see one household at a time, and no more than one a day, I would have had to choose between them, and it would have caused just a family dispute.

"So I decided to keep the peace and just not see any of them last weekend."

During the interview, she was also asked about plans for her upcoming 50th birthday which coincides with the 10th anniversary of her wedding with SNP CEO Peter Murrell.

The couple had discussed going on holiday or having a gathering of family and friends, but said "none of that's going to happen" and suggested some low-key celebrations instead.

Ms Sturgeon said: "I think it's fair to say what we've all been living through in the past couple of months is putting all sorts of things in perspective.

"I think this is a time in all of our lives, where we should probably focus on good things that we have, and that we're lucky for them and not moan about the things that we might normally have moaned about."

But the First Minister also joked that she would have traded her husband for a trip to the hairdressers.

When discussing one caller not being able to see their boyfriend, Ms Sturgeon said: "Maybe I should ask her what's most important – getting to see her boyfriend for a hug or getting her hair cut.

"Because if I had that choice right now I, you know I hope my husband's not listening, but I think I'd probably go for the haircut."