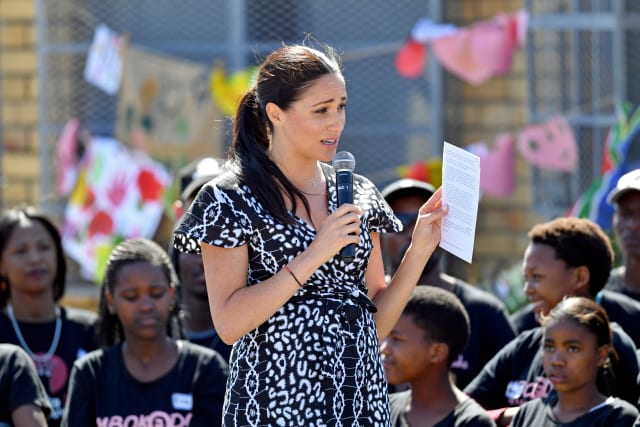 The Duchess of Sussex has opened up in the past about how racism has affected her own family.

Meghan, who delivered a powerful speech to school leavers at her old high school, telling them George Floyd’s life mattered, has previously described the experiences of both her mother and grandfather, and her own journey as a biracial woman.

The former Suits star became the first mixed-race person in modern history to marry a senior British royal, in 2018.

But Meghan and the Duke of Sussex quit as senior working royals in March to pursue personal and financial freedom in the US, after telling of their struggles dealing with their royal life and the intense tabloid interest.

The American ex-actress recounted, before marrying into the Windsor family, how her grandfather told her as a child that he and his family stopped off at Kentucky Fried Chicken during a road trip, but had to go to the back of the restaurant for “coloureds” and eat the chicken in the car park.

“That story still haunts me,” she wrote. “It reminds me of how young our country is.

“How far we’ve come and how far we still have to come.”

Meghan, whose father Thomas Markle is Caucasian and mother Doria Ragland is African-American, wrote of her background: “While my mixed heritage may have created a grey area surrounding my self-identification, keeping me with a foot on both sides of the fence, I have come to embrace that.

“To say who I am, to share where I’m from, to voice my pride in being a strong, confident mixed-race woman.”

In a piece for Elle Magazine in 2015, she said she witnessed her mother being called “the n word” by another driver in Los Angeles and described the heartache it caused.

“My skin rushed with heat as I looked to my mom. Her eyes welling with hateful tears, I could only breathe out a whisper of words, so hushed they were barely audible: ‘It’s OK, Mommy’,” she wrote.

Meghan also described how her great-great-great-grandfather went on to create his own identity when freed from slavery.

“Because in 1865 (which is so shatteringly recent), when slavery was abolished in the United States, former slaves had to choose a name. A surname, to be exact,” she wrote.

“Perhaps the closest thing to connecting me to my ever-complex family tree, my longing to know where I come from and the commonality that links me to my bloodline, is the choice that my great-great-great grandfather made to start anew.

“He chose the last name Wisdom.”

As a child, her father, from whom she is now estranged, created a Barbie family for Christmas when they were only sold in sets of white dolls or black dolls.

She wrote on her lifestyle blog how her new collection had “a black mom doll, a white dad doll, and a child in each colour. My dad had taken the sets apart and customised my family.”

When her fledgling relationship with Harry hit the headlines in 2016, the royal press team hit out at the “wave of abuse and harassment” Meghan had faced from the media.

When the couple married in a glittering ceremony in May 2018, commentators described their relationship as love transcending race in the most traditional institution in Britain.

For an opinion piece in the Metro, video journalist Funmi Olutoye described the significance of the romance.

“Never in a million years did I think someone in the royal family would be romantically involved with someone whose skin is a darker hue than theirs,” she said.

“It speaks volumes about how society is changing, albeit slowly. But it’s definitely changing.”

Friends of Meghan’s later denounced her critics as racists, after Harry and Meghan were scrutinised for taking four private jet journeys in 11 days, despite their environmental campaigning.

Canadian stylist Jessica Mulroney wrote on Instagram in the summer of 2019: “When someone faces unfair criticism, you call it out.

“When that person is your friend and your family, you call those critics what they truly are. Shame on you, you racist bullies.”

During the couple’s tour of South Africa, Meghan delivered a rousing speech to teenage township girls, speaking publicly for the first time since becoming a member of the royal family about being a “woman of colour”.

She said to cheers from the crowd: “On one personal note, may I just say that while I’m here with my husband, as a member of the royal family, I want you to know from me I am here with you as a mother, as a wife, as a woman, as a woman of colour and as your sister.”