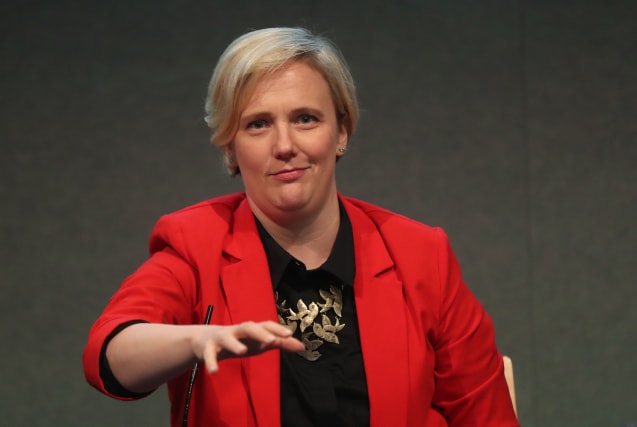 A Labour MP has contributed to a debate on abortion regulation in Northern Ireland while cradling her baby daughter in her arms.

Labour’s Stella Creasy, who has long campaigned for abortion to be decriminalised in Northern Ireland, warned that devolution “doesn’t absolve us of our responsibility to uphold the human rights of every UK citizen”.

Ms Creasy, who during her pregnancy was targeted with posters by anti-abortion group CBRUK because of her pro-choice stance, also urged the Northern Ireland Assembly to come up with alternative proposals if they disagree with the UK Government’s plans.

In May, an anti-abortion campaigner failed to overturn a ban on posting images of Ms Creasy alongside photos of a dead foetus in her constituency.

Ms Creasy has said the posters, which appeared around Walthamstow last October, made her feel “harassed”.

Speaking in the Commons as her daughter gurgled away, Ms Creasy (Walthamstow) said: “We all recognise that this is a difficult issue for many and that there are strongly held views on all sides of this debate.

“But one of the reasons why this House stood up for the human rights of all women in the United Kingdom was just because it was too difficult didn’t mean that their rights should be denied.

“And devolution doesn’t absolve us of our responsibility to uphold the human rights of every UK citizen. And I respect the argument that the minister is making, as does my daughter, that the human rights are at the heart of all of this, and that the role of the Assembly should be to come up with its alternative proposals if it doesn’t like these regulations.

“Because to not propose these regulations would mean further delay and possibly women making unsafe choices in Northern Ireland because there isn’t clarity about what services are available to them.”

Ms Creasy added that “travelling is not a sustainable option” for women seeking abortions, particularly during the current pandemic.

“How do we ensure that we uphold the rights of CEDAW that we have said every woman in the United Kingdom is entitled to be covered by?,” she said.

In response, Northern Ireland minister Robin Walker said: “I do think that it is important that we should end the need to travel and that is what these regulations properly implemented should do.”

He added that “is not something that can necessarily be done instantly” and the Government “will continue to fund and support travel in the interim”.

Mr Walker said: “We will work with the Department of Health in Northern Ireland, provide them with the support that they need and continue to engage with the relevant medical bodies to make sure that this process can be completed as quickly as possible.

“And I would join her in once again urging the Assembly to engage with this and support this actively in order to make sure that we have a set of measures in place that can really deliver for women and girls in Northern Ireland.”