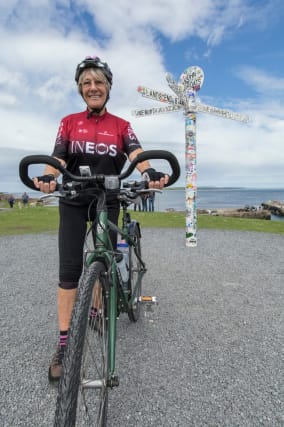 An NHS worker was reunited with her daughters and a fundraising grandmother plans a 1,600-mile bike ride, in Wednesday’s news.

An NHS healthcare worker has been reunited with her daughters after nine weeks apart during the pandemic.

Suzie Vaughan, 43, from King’s Lynn, Norfolk, surprised Hettie, seven, and Bella, nine, after spending more than two months away from them while she worked on the front line of the health crisis.

In a video that quickly went viral on social media, she is seen sneaking up behind her children, who had been staying with her sister Charlotte.

Ms Vaughan told the PA news agency: “We had said it was only going to be for a maximum of a month, but nobody knew at the beginning of this how it was going to go.

“It was amazing to see them again, I missed the girls terribly. When they started crying I felt so bad but so relieved I was back with them.”

A grandmother is planning to cycle the 1,600-mile Wild Atlantic Way next year for a cancer charity – after she overcomes a knee operation.

Mavis Paterson, who lives near Stranraer in Dumfries and Galloway, started raising money for charity after losing all three of her children in the space of four years.

The 82-year-old last year became the oldest woman to cycle from Land’s End to John O’Groats and raised more than £75,000 for Macmillan Cancer Support in the process.

Now she is raring to support the charity again with another ride in 2021, this time the longest coastal bike route in the world, in Ireland.

Ms Paterson said: “I just have the small issue of a knee operation and then I can start to plan this. I love Ireland and it’s a long way to go, but I know I can do it.

“It has taken me a long time to get to this point in my life, I’ve had a lot of help and support along the way. To lose a child is the worst thing on earth, but to lose all three?

“I do it for Macmillan but I also do it for my three children, it’s for them too.”

An alpaca at London Zoo has been given a new hairstyle after keepers clipped his fur to keep him cool.

Trigger received the haircut as the zoo entered its 11th week of being closed to visitors due to the coronavirus outbreak.

Posting photos of the sleek-looking alpaca, the zoo said: “ZSL London Zoo keepers have given Trigger the alpaca a lockdown haircut to keep him cool during the country-wide heatwave.”

It came as the Met Office reported that May was the sunniest month the UK has seen since records began.