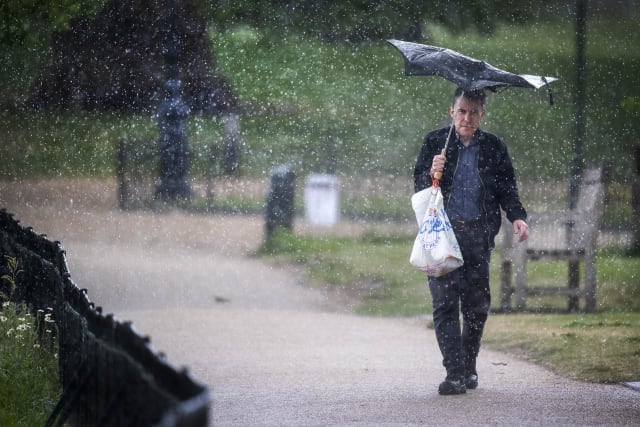 Boris Johnson has urged the public not to start gathering indoors as the weather worsens – warning it could undermine the progress made by the coronavirus lockdown.

The Prime Minister said people may be tempted to organise indoor social gatherings to avoid the rain, but warned the risk of passing the virus on is “significantly higher” inside.

It comes as rain and cooler temperatures hit Britain after days of hot weather.

Sunseekers who basked in highs of 28C over the weekend, as the nation recorded its sunniest spring since records began in 1929, are faced with cooler weather, with some places seeing heavy rain.

Bands of cloud will move in across the week and rain is expected to spread across the South and East of the UK, introducing cooler, fresher air and increasing winds, according to the Met Office.

The PM told the daily Downing Street briefing: “I want to stress one final point which may be relevant today as the weather threatens, I think to take a turn for the worse.

“Some of you may be tempted to move the gatherings you’ve been enjoying outdoors indoors out of the rain. I really urge you: don’t do that.

“We relaxed the rules on meeting outside for a very specific reason because the evidence shows the risks of transmission are much lower outdoors.

“And the risks of passing on the virus are significantly higher indoors which is why gatherings inside other people’s homes are still prohibited.

“Breaking these rules now could undermine and reverse all the progress that we’ve made together.

“I have no doubt that won’t happen.”

As of Monday, people in England have been allowed to meet up outdoors in groups of up to six and to host barbecues in private gardens as long as social distancing rules are followed.

Meteorologist Steven Keates said there will be “a big change” for many parts of the UK, adding: “On Tuesday we had temperature highs of 26.9C in Gosport. It will be much cooler than that, particularly in the South.

“We will also be seeing some welcome rain for most of us. The month of May has been exceptionally dry and so there will be some useful rain for gardeners and growers over the next few days.”

With the cloud spilling south after a warm day, it was mild overnight moving into Wednesday, where temperatures of 16.1C at Brize Norton may have led to uncomfortable sleeping for some.

But Wednesday evening is set to be fresh, with most places reaching between 7C and 12C.

Saying there could be sunshine and showers that may be “on the sharp side” on Thursday, Mr Keates said: “It could be cloudy and a rather unsettled day – not a washout but there are some showers to watch out for, so if you are out, having a brolly to hand is probably not a bad idea.”

Temperatures are set to reach from 12C to 14C across Scotland and around 16C to 17C further south in England and Wales, meaning that it will be a little lower than might be expected at this time of year.

Water UK, which works with water companies and regulators, welcomed the unsettled weather after a recent jump in household demand and peaks of water usage in the evening.

The rise is down to a combination of more people staying at home and the hot weather.

Lower water pressure can occur at peak times when more people are using it at the same time.

Water companies are urging people to use water more carefully.

They stress it is important for everyone to stick to the safety advice during the pandemic of washing their hands regularly, but they are also asking people to avoid hoses and sprinklers, not to fill paddling pools, and to take shorter showers.