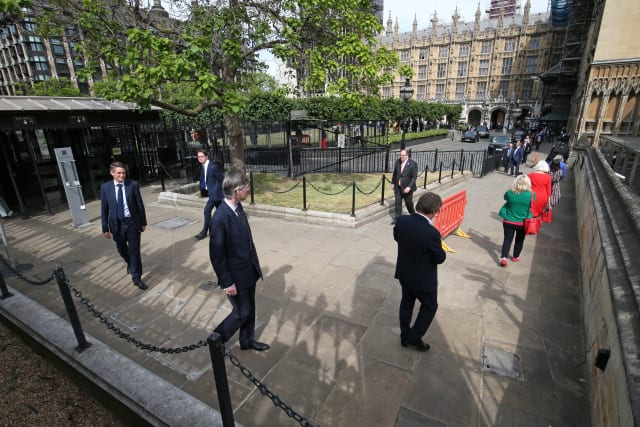 Boris Johnson has dismissed complaints over MPs queuing to vote by comparing the lengthy wait to those experienced by people at supermarkets.

The Prime Minister added that the Government wants proxy voting to be in place for those who cannot attend Parliament as they are shielding or elderly.

It comes following fierce criticism that MPs with disabilities and caring responsibilities have been shut out by the ending of virtual proceedings.

Chaotic scenes emerged in the House of Commons on Tuesday as MPs joined an Alton Towers-style queue to decide to end online voting during the Covid-19 pandemic.

Social distancing measures required them to join a queue, keep two metres apart, walk through the Commons chamber and announce their vote.

The queue stretched for several hundred metres, snaking throughout the parliamentary estate, with the first vote running for 46 minutes.

Labour leader Sir Keir Starmer described the scenes as “shameful” and pushed the PM to end the “completely unnecessary and unacceptable” process, and instead allow remote voting to resume.

He told Prime Minister’s Questions: “If any other employer behaved like this, it’d be a clear and obvious case of indirect discrimination under the Equalities Act.”

Mr Johnson replied: “I do think (Sir Keir) needs to consider what is really going on throughout the country where ordinary people are getting used to queuing for long periods of time to do their shopping or whatever it happens to be.

“I do not think it’s unreasonable that we should ask parliamentarians to come back to this place and do their job for the people of this country.

“I know it’s difficult and I apologise to colleagues for the inconvenience and I apologise to all those who have particular difficulties because they’re shielded or elderly, the change we’re making today will mean they should be able to vote by proxy.”

Mr Johnson also said of Sir Keir: “Our policy is test, trace and isolate, his policy is agree, U-turn and then criticise.

Mr Johnson was heckled by some, who objected to his suggestion that MPs are only working when in Parliament.

Mr Johnson ended PMQs by heading towards the chamber exit but stopping for a chat with a Conservative colleague, thereby walking over hazard tape on the floor designed to encourage MPs to keep two metres apart.

The size of the chamber has made it difficult for some MPs to keep their distance as they try to swap seats or move around.