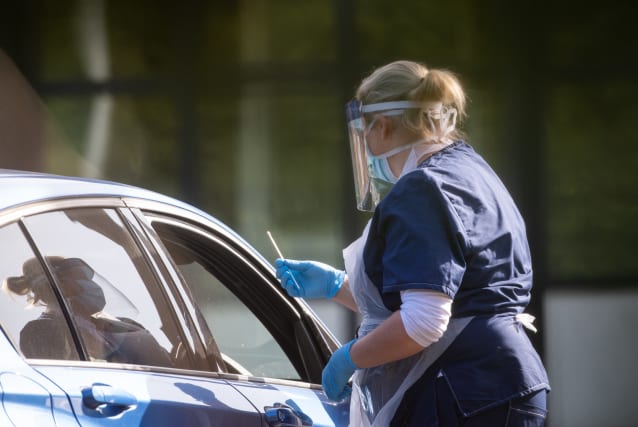 Boris Johnson has renewed calls for anyone with symptoms of Covid-19 to book a test after it emerged there are concerns about the number of people coming forward.

The Prime Minister used the daily press briefing to say there was plenty of capacity in the system and told people they should book a test if they have a high temperature, new cough or loss of taste or smell.

Earlier, he pledged to cut the amount of time people wait for result amid fears it is taking too long to get people to self-isolate and have their contacts traced.

Baroness Dido Harding, who is heading up the NHS test and Trace programme, also told MPs not enough people were coming forward to book a test.

At the Downing Street briefing, Mr Johnson said: “NHS Test and Trace will be vital to controlling the spread of the virus.

“It’s how we will be able to protect our friends and family from infection and protect our NHS.

“It does this by identifying anyone who’s been in close contact with someone who’s tested positive, asking them to isolate for 14 days.

“In order to avoid unknowingly infecting others and the system clearly relies on everyone playing their part.

“So I want to stress again today: We need you to get a test.

“If you have coronavirus symptoms, a high temperature, a new continuous coffee or a loss of taste or smell, there is plenty of capacity, and everyone with symptoms is eligible…so please order a test.”

Earlier, Baroness Harding told the Commons Health and Social Care Committee that the Office for National Statistics suggest there are roughly 8,000 people contracting Covid-19 every day.

But she said that, yesterday, only around 1,600 people had a positive test.

“What we need to do together as a society is encourage everyone, if they feel ill and they have a cough and fever or lost their sense of taste or smell that they self-isolate and order a test.”

Polling has shown that only 44% of adults knew that all adults were eligible for a test, she added.

“What we know is, not enough of us are ordering a test when we don’t feel well. So, we need to get more people into the tracing system.”

Committee chairman Jeremy Hunt told Baroness Harding he was “disappointed” that she was unable to produce data on the proportion of new Covid cases that had been contacted by a clinician within 24 hours.

And he pledged that more tests would be returned within 24 hours by the end of June.

He said: “I can undertake to him (Mr Hunt) now to get all tests turned around within 24 hours by the end of June except for difficulties with postal tests or insuperable problems like that.”

Around half of all tests so far have been postal tests, with the rest carried out in person.

The Prime Minister also said thousands of people have been traced under the Government’s test and trace system, but did not give a precise figure.

Some of the more than 25,000 contact tracers employed by the Government have told the media they have nothing to do, despite earning up to £27.75 an hour.

Channel 4 News also reported on Tuesday that of 4,634 contacts provided to NHS Test and Trace by people who have tested positive for Covid-19, just 1,749 were contacted in the first four days of the system going live.

The Department of Health said those figures were out of date, adding that it intends to publish weekly performance data shortly.

During a heated exchange with Labour leader Sir Keir Starmer at PMQs, Mr Johnson did not give a number for how many contacts had been traced but said: “Thousands of people are being tested every day.

“Every person who tests positive in the test and trace programme is then contacted, then thousands of their contacts are then contacted, people they have been in contact with.

“At the moment as a result of our test, track and trace system… thousands of people are now following our guidance, following the law, and self-isolating to stop the spread of the disease.”

Downing Street said later that figures on the performance of the test and trace scheme would only be released once they had been verified and processes had been discussed with the statistics watchdog.

The UK Statistics Authority has rebuked Health Secretary Matt Hancock over the way testing figures have been handled so far.

The Prime Minister’s official spokesman said: “We are encouraged by the progress so far and are working with the UK Statistics Authority to consider what information it would be useful to publish on the performance of the service and taking the time to ensure this is verified.”