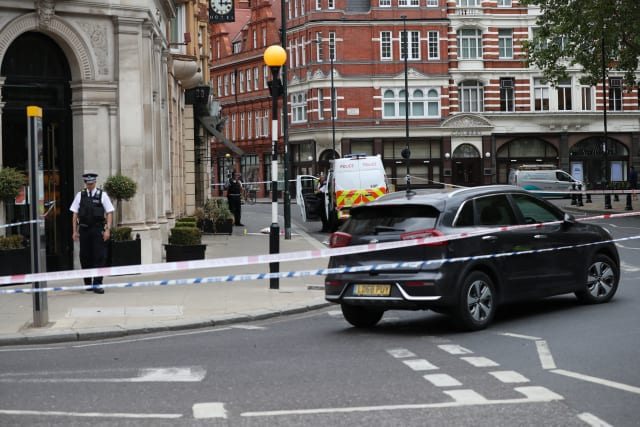 A man has been arrested for driving offences after two people were hit by a car in Sloane Square, central London, the Metropolitan Police said.

The incident is not being treated as terror related, while officers evacuated nearby buildings “as a precaution”.

Scotland Yard said the car was found abandoned in Sloane Square, Kensington, on Wednesday, and cordons were put in place while the vehicle was searched.

The condition of the two people injured in the incident is not known.

A man was subsequently arrested for driving offences, police said.

“Await update on condition of those injured in the collision in #SloaneSquare #Kensington,” the force tweeted. “To confirm; this incident is not being treated as terror related.”

A spokeswoman for the London Ambulance Service said they were called at 12.08pm following reports of a road traffic collision involving pedestrians.

“We dispatched two ambulance crews and a medic in a car, with the first of our crews arriving in under four minutes,” the spokeswoman said.

“We treated two men at the scene and took them both to hospital.”