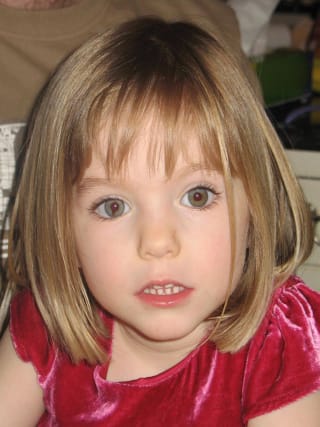 It is more than 13 years since three-year-old Madeleine McCann vanished from the Portuguese coastal village of Praia da Luz while on holiday with her parents, Kate and Gerry, and siblings.

As the Metropolitan Police have identified a suspect, here is a timeline of events surrounding her disappearance and some of the developments over the following years.

– May 3: Kate and Gerry McCann, from Rothley, Leicestershire, leave their three children asleep in their holiday apartment in Praia da Luz in southern Portugal while they dine with friends at a nearby tapas restaurant.

Nothing is amiss when Mr McCann checks on the youngsters just after 9pm, but when his wife goes back at about 10pm she finds three-year-old Madeleine missing.

Jane Tanner, one of the friends dining with the McCanns, reports seeing a man carrying a child earlier that night.

– May 14: Detectives take Anglo-Portuguese property developer Robert Murat in for questioning and make him an “arguido”, or formal suspect.

Officers also search the home he shares with his mother in Praia da Luz, just 100 yards from where the youngster vanished.

– August 11: Exactly 100 days after Madeleine disappeared, investigating officers publicly acknowledge for the first time that she could be dead.

– September 7: During questioning of Mr and Mrs McCann, detectives make them both “arguidos” in their daughter’s disappearance.

– September 9: The McCanns fly back to England with their two-year-old twins Sean and Amelie.

– July 21: The Portuguese authorities shelve their investigation and lift the “arguido” status of the McCanns and Robert Murat.

– May 12: Mrs McCann publishes a book about her daughter’s disappearance, on Madeleine’s eighth birthday.

Scotland Yard launches a review of the case after a request from Home Secretary Theresa May, supported by Prime Minister David Cameron.

– April 25: Scotland Yard detectives say they believe Madeleine could still be alive, release an age-progression picture of how she might look as a nine-year-old, and call on the Portuguese authorities to reopen the case, but Portuguese police say they have found no new material.

– July 4: Scotland Yard confirms it has launched its own investigation, Operation Grange, into Madeleine’s disappearance two years into a review of the case. It has “genuinely new” lines of inquiry and has identified 38 people of interest, including 12 Britons.

– October 24: Portuguese police confirm that a review of their original investigation has uncovered new lines of inquiry, and they reopen the case.

– January 29: British detectives fly to Portugal amid claims they are planning to make arrests.

– June 3: Sniffer dogs and specialist teams are used to search an area of scrubland close to where Madeleine went missing.

– December 12: Detectives began questioning 11 people who it was thought may have information on the case.

– September 16: The Government discloses that the investigation into the disappearance of Madeleine has cost more than £10 million.

– October 28: Scotland Yard’s investigation into the disappearance has been cut from 29 officers to four.

– April 30: The couple prepare to mark 10 years since their daughter’s disappearance with a BBC interview where they vow to do “whatever it takes for as long as it takes” to find her.

– May 3: Local media report Portuguese detectives are investigating a foreign paedophile as a suspect in the abduction of Madeleine McCann.

– June 3: Police reveal that a 43-year-old German prisoner has been identified as a suspect in Madeleine’s disappearance.