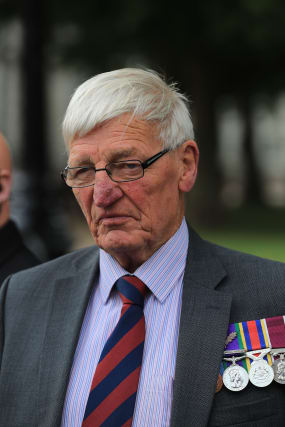 A former British soldier facing prosecution over a fatal shooting during the Northern Ireland Troubles has lost a bid to bring a High Court challenge over alleged discrimination against veterans.

Dennis Hutchings, 79, is due to stand trial in Belfast on charges of attempted murder and attempted grievous bodily harm with intent over the death of John Pat Cunningham in Co Tyrone in 1974.

Hutchings, from Cawsand in Cornwall, a former member of the Life Guards regiment, has previously unsuccessfully attempted to stay his prosecution as an abuse of process, and also lost a Supreme Court challenge to have a trial before a jury.

He has now taken legal action against the Government, claiming that it has failed to protect veterans from “ongoing discriminatory treatment by the criminal justice system” in Northern Ireland.

At a remote hearing conducted on Wednesday, Hutchings’ barrister Austen Morgan argued that former soldiers were unlawfully being treated differently to terrorists.

He said that Hutchings, who is on dialysis twice a week for renal failure, was one of six “elderly and often seriously ill” former soldiers who had been “lined up for prosecution”.

Mr Morgan told the court that, of more than 3,500 people killed between 1966 and 2006, roughly 60% were killed by republican paramilitaries, 30% by loyalist paramilitaries and 10% by soldiers or the police.

He continued that “in an ideal situation of fairness and equality, with post-Troubles prosecutions of historic cases proceeding slowly, one would expect prosecutions in Northern Ireland – if not convictions – to be running, from 1998, at very roughly a 60%/30%/10% proportion”.

But, Mr Morgan added, while there have been prosecutions of republicans and loyalists for crimes committed before the signing of the Good Friday Agreement in 1998, “there are no comparable lists of pending terrorist prosecutions”.

He submitted that “a former soldier is 54 times … more likely to be prosecuted than a republican or loyalist terrorist”.

He also argued that Hutchings was treated differently to John Downey, a convicted IRA member suspected of carrying out the 1982 Hyde Park bombing whose criminal trial collapsed in 2014.

Mr Morgan said Hutchings was issued a letter by an army lawyer in 1974 stating that he would not be prosecuted, but that his application to stay his prosecution on the basis of that letter was ultimately rejected.

Downey’s prosecution, however, was stayed as an abuse of process after it was revealed that he had received a written assurance from former prime minister Tony Blair’s government – under the terms of the controversial “On The Runs” scheme – that he was no longer wanted.

Mr Morgan argued: “If he (Hutchings) had been arraigned in the Old Bailey, his letter would, unlike in Belfast, have led to an abuse of process application being granted.”

Mr Morgan also said that the Government “made an error of law” when it agreed a deal with the Irish government to restore powersharing in Northern Ireland as it broke the Conservative Party’s manifesto pledge to “do more to give veterans the protection they deserve”.

Naina Patel, for the Government, said in written submissions that Hutchings’ contention that the Government appeared to “resile from those alleged promises in relation to Troubles-related prosecutions of British Army veterans” was unarguable.

She added: “Since prosecutorial decisions are taken independently of Government and have been a devolved matter in Northern Ireland since 2010, the Secretary of State for Northern Ireland is not responsible for the decision to prosecute the claimant in 2015.”

Dismissing Hutchings’ application for permission to bring a judicial review, Mr Justice Lewis ruled that his case was unarguable.

He said: “This is a claim against the Secretary of State for Northern Ireland, (but) he is not the body responsible for dealing with prosecutions of people in Northern Ireland.”

The judge added that there was no “inconsistency” between the Conservatives’ manifesto pledge and its agreement with the Irish government, stating that they were both “general statements of political intent”.