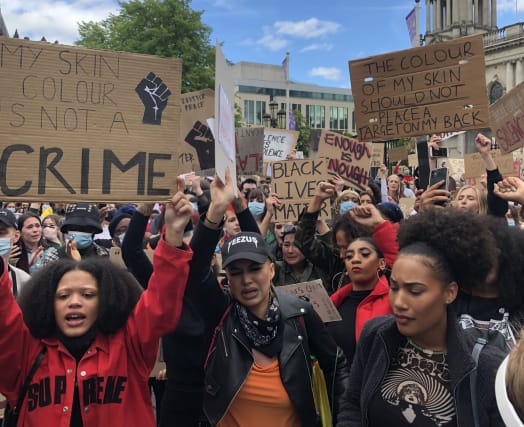 More than 1,000 people have taken part in a noisy and emotional Black Lives Matter protest in Belfast city centre.

Demonstrators took over the main road in front of the landmark City Hall for more than two hours, forcing police to divert traffic.

They chanted, knelt and held aloft hundreds of placards to protest against the death of George Floyd in police custody in the US last week.

People were packed tightly together at the centre of the City Hall protest with others observing social distancing at the fringes of the rally.

Several black demonstrators made impromptu speeches to the crowd of mainly young people.

One woman broke down and was comforted by friends as she spoke.

“You will not silence me,” she said. “You will hear me. Never be quiet, never be quiet. Stand the f*** up. Black lives matter.”

Crowds chanted “No justice, no peace” and “I can’t breathe” and repeatedly called out Mr Floyd’s name.

The police presence was low key, with officers observing from a distance.

The protest took place as a new mural of Mr Floyd was being painted at the famous International Wall on the Falls Road.

At the daily Covid-19 briefing at Stormont, economy minister Diane Dodds urged the demonstrators to exercise responsibility, given the lockdown restrictions.

“We all have watched with horror the video of George Floyd, the terrible things that have happened,” she said.

She added campaigners should remember the need to protect people at home as well during the pandemic.

“We are at a critical stage,” she said.

Mrs Dodds said it was up to everyone to take responsibility for social distancing.

“While we may want to stand in solidarity with those in the US who have been grievously hurt, we have to have a responsibility to ourselves and others in our immediate vicinity here in Northern Ireland,” she said.

Johnny Depp arrives at court for second week of trial