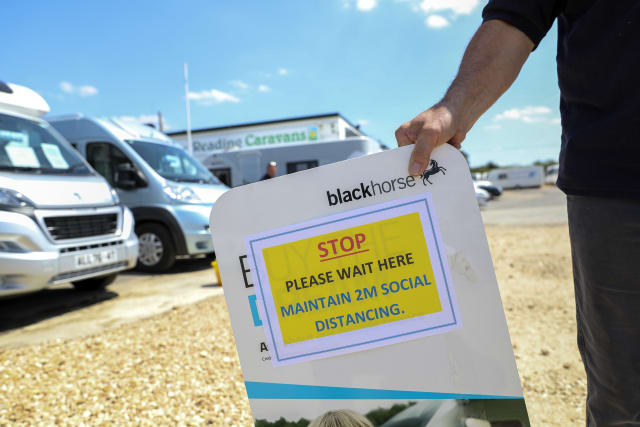 The two-metre social distancing rule is “vital” and should not be reduced despite calls from industry groups as more businesses prepare to open, the Chartered Institute of Environmental Health (CIEH) has said.

The professional body, which represents those who work in environmental health roles such as in the food, housing and transport industries, has urged the Government to maintain the two-metre guidance.

Industry groups and several MPs including former environment secretary Theresa Villiers have called for the distance to be reduced to save jobs and help the hospitality sector reopen.

Places such as theatres, pubs and entertainment venues could be hit hard by the current two-metre rule, which would severely restrict the number of patrons allowed inside and the staff needed.

However, the CIEH said the Government needed to maintain its stance on social distancing especially as “riskier” businesses such as pubs prepare to open.

The body referenced a new study which suggested physical distancing of at least one metre lowers the risk of coronavirus transmission, but distances of two metres could be more effective.

The risk of infection when people stand more than a metre away from the infected individual was found to be 3%, and 13% if within a metre.

However, according to the analysis published in The Lancet, modelling suggests for every extra metre further away up to three metres, the risk of infection or transmission may halve.

CIEH Wales director Kate Thompson said: “The World Health Organisation advice for distances of at least one metre to be maintained, to prevent the spread of coronavirus, has led to strong pressure from certain industries to reduce social distancing between individuals from the current two metres.

“However, this advice was only ever an absolute minimum, rather than a safe distance, and new evidence published today supports this longer distance.

“Protecting public health and avoiding the possibility of a second peak of infections should be key. It is, therefore, vital that the two-metre rule is not reduced due to pressure from industry.

“We call on the Government to stand firm in its stance on the two-metre rule when it comes to social distancing, especially as the riskier businesses, like pubs and hairdressers, are set to reopen from next month.”

In The Lancet study, the researchers looked at data from nine studies across Sars, Mers and Covid-19, including 7,782 participants.

Professor Holger Schunemann, from McMaster University in Canada, who co-led the research, said: “Our findings are the first to synthesise all direct information on Covid-19, Sars, and Mers, and provide the currently best available evidence on the optimum use of these common and simple interventions to help ‘flatten the curve’ and inform pandemic response efforts in the community.”

According to the researchers, keeping at least one metre from other people as well as wearing face coverings and eye protection, in and outside of healthcare settings, could be the best way to reduce the chance of viral infection or transmission of Covid-19.

The study, conducted to inform WHO guidance documents, looked at the available evidence from the scientific literature and is the first time researchers have systematically examined the optimum use of these protective measures in both community and healthcare settings for Covid-19.